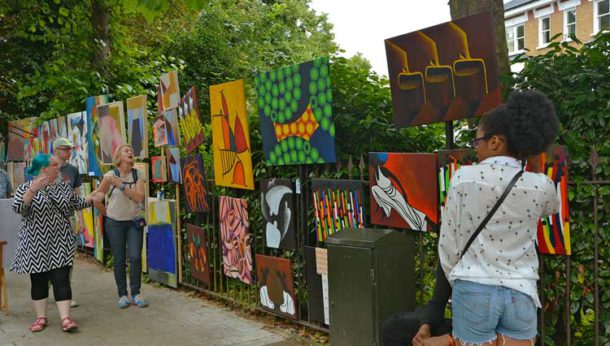 Organisers of Brixton’s Urban Art Fair – one of the events that has helped to boost Brixton’s reputation as a creative powerhouse since it was founded 15 years ago – say it may have to close because of charges imposed by Lambeth council.

The first show in 2002 was a one-day event with 36 exhibitors celebrating local creative talent and raising money for the avenue’s residents association.

Organiser Tim Sutton said that “Back in 2002 a pop-up street market was a new idea”.

When he approached the council for seed funding he was told by the arts officer that any money available would be spent on council-led projects only.

“Since then residents have seen a number of council resourced street markets spring up across the borough all of which compete for both for visitors and exhibitors,” he said.

Together with a £500 payment to exhibit street art produced at the fair in Windrush Square, Urban Art would have to pay the council £2,500 to put on Urban Art 2017.

Sutton warned: “Urban Art will not be used as a revenue stream for Lambeth’s own arts projects. After 15 years of battling with Lambeth I am exhausted. Maybe it’s time to call it a day.”