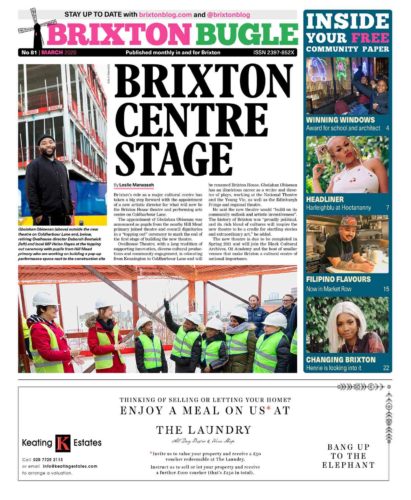 We are an online community newspaper covering Brixton, London. As well as our online presence, we publish a monthly newspaper with a print run of 12,500 that you can pick up from many places around Brixton as well as from our monthly hand-out at Brixton Tube Station.

We cover local news, culture, food and sport for the benefit Brixton residents, visitors and all those with a link to the area.

The Brixton Blog and Brixton Bugle are published by Brixton Media CIC. It is a Community Interest Company which must be run for the benefit of the community. Any profits must be reinvested in the business or community and not distributed to shareholders.

The Brixton Blog and Brixton Bugle are regulated by Impress – the independent monitor for the press.

How we are funded

Currently our main source of funding is through advertising in our newspaper and online. We also carry, clearly labelled, sponsored pages for the Brixton BID (a local business organisation) and for some local schools. In the past we have received one-off grants from The Journalism Foundation and the Carnegie Trust.

None of section editors and contributors are paid (apart from their expenses) – all work in other jobs, sacrificing a lot of their social time to write for the Blog & Bugle. They are motivated by a love for Brixton and the good of the community.

Where it all started

The Brixton Blog and Bugle were established by Zoe Jewell and Tim Dickens.

Zoe was born and raised in Brixton, growing up with the view from the top of Brockwell Park, swimming in the Rec, and jostling through the crowds on Brixton Road. She started the original blog in 2010 and was joined in January 2012 by Tim. He was a more recent immigrant to south London. He grew up by the Essex coast and moved to London 2008. He earned his stripes working as a journalist for the Bromley Times and then the Ilford Recorder. Tim fell in love with Brixton the moment he moved into a flat above the Effra Tavern.

Together Tim and Zoe expanded the breadth of their reporting and in June 2012 began publication of the Brixton Bugle newspaper. In November 2013 they were nominated for Innovation of the Year at the British Journalism Awards.

In September 2015 Zoe and Tim took a step back after years of hard work both holding down full-time jobs and publishing the Brixton Blog and Bugle. Linda Quinn, a Glaswegian by birth and a Brixtonian by residence, picked up the reins. She moved to Brixton in the 1970s so has lived through many waves of changes to the Brixton area.

We are always on the look out for great people to join us in writing about Brixton news and it’s community.

Send us a story

Have an interesting story; took a fun photo; want to share an opinion or you have a great event coming? Get in touch.