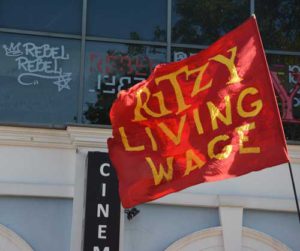 The BECTU section of Prospect, the union representing Picturehouse staff including those at Brixton’s Ritzy campaigning for the London living wage, is to ballot its members on strike action for a second time.

The first ballot in January – with a 77% turnout and a 96% “Yes” vote across three cinemas – has been challenged by the company’s lawyers on a legal technicality.

BECTU says workers have also been threatened with legal action over unfounded claims of intimidation and unlawful picketing.

The Crouch End Picturehouse in North London has now joined the campaign and will be included in the new ballot for strike action.

Kiv Legate, Ritzy union branch secretary, said: “These attempts to intimidate and discourage the strikers have not only failed, but have also highlighted the fact that Picturehouse would rather use their substantial profits to pay for expensive lawyers and sue their workers than commit to an ethical pay structure. It is intensely disappointing Cineworld works so hard not to pay their workers a living wage.”