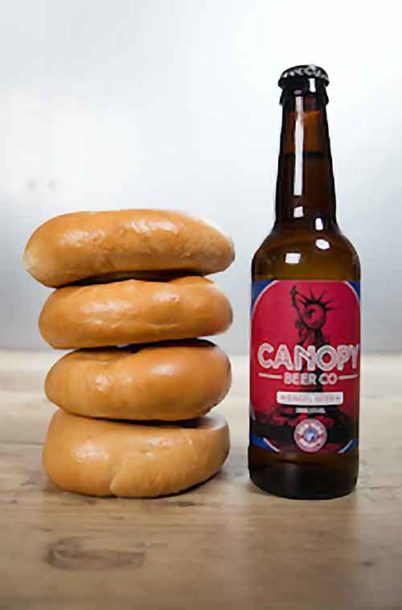 Today (9 February), as if you didn’t know, is National Bagel Day.

And, in Brixton, munching a breakfast bagel is not the only way to celebrate. Local brewery Canopy Beer, based in a Herne Hill railway arch opposite Brockwell Park on Norwood Road, has got together with the New York Bakery Co to brew a limited edition Bagel Beer.

Naturally, it’s brewed from chopped-up and toasted bits of NYBC’s Original Bagels. Coming in at 5.7% alcohol, it should be fruity, smooth and easy drinking.

You can get it on draught in the Sympathetic Ear at the bottom of Tulse Hill (No. 37, SW2 2TJ) as well as Canopy’s brewery tap. It’s also due to be available online from today at eebria.com in bottles at £3 each.

UK bagel-lovers get through 500 million a year, according to Christina Honigfort, head of marketing for New York Bakery Co.

She also points out that, unlike any other bread, bagels – which originated in the Jewish communities of Poland – are boiled and then baked, giving them their glossy exterior and soft texture. The hole in the middle allows the bagel to cook faster and increases the amount of chewy crust.

“National” bagel day is USA national bagel day. And, over there, today is also National Pizza Day and  National Toothache Day. So, come on Brixton pizzerias and dentists, how about a beer from you in 2019?