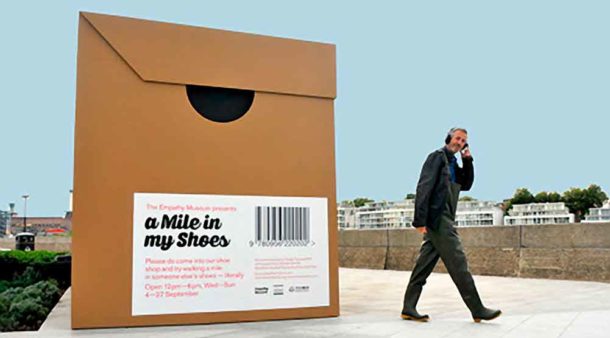 Out of the blue, as I’m walking along the Thames River path at Vauxhall, I come across a giant shoebox. It’s definitely a shoebox – but as big as a bungalow. My curiosity is piqued, so I head towards it to find out what the hell is going on.

I enter the large shoebox; I’m asked what size shoes I wear. By the way, I’m not dreaming.

I’m given a pair of nurses’ shoes, some headphones and told that if I walk to the end of the road and back I will have walked a mile in another person’s shoes.

The idea is not only to walk in another person’s shoes, but also to listen to their story.

Empathy, compassion and understanding are what you’re meant to experience when walking this mile.

The Empathy Museum was founded by Roman Krznaric. In a recent interview, he said: “I founded the Empathy Museum for a very specific reason: to create inspiring artworks that spark a public conversation about the power of empathy not just to transform personal life but to bridge social divides.

“In a world of growing inequalities and ‘us versus them’ xenophobia, and where we are increasingly trapped in narrow social media silos that reinforce our beliefs and ideas, there is more need than ever to escape the straitjacket of our own viewpoints and experiences.”

The lady whose shoes I’m wearing is a nurse in a hospice.

Intrigued, I went back for more. I was underground with a woman engineer working on the Super Sewer. Brilliant.

A young Muslim lady was next. She likes to spend time alone so she can’t be judged on her appearance.

Just as exciting was passing people who were also walking in another person’s shoes.

A man in a pair of waders up to his thighs … he’s listening intently.

Another bloke walks past me in a pair of women’s shoes. He’s struggling but determined.

Well, that was about three years ago. It was an afternoon activity that stayed in my mind for ages.

Fast forward to today and the Brixton Calling column has been contacted by Empathy Museum staff, who heard our audio feature with the great Alan Wilmott, an ex-serviceman from the West Indies who served in WW2 and was honoured at the unveiling of the War Memorial dedicated to the African and West Indian ex-servicemen in Brixton.

They would like to feature a shortened version of it in their new project called Migration.

Of course, we jumped at the idea.

You can find the new collection of 20 stories at the little-known Migration Museum on Lambeth High Street.

You will be as pleasantly surprised as I was to come along to the huge shoebox, which is placed right outside the building, and immerse yourself in someone else’s world.

A Mile in My Shoes. accompanies the Migration Museum’s No Turning Back: Seven Migration Moments that Changed Britain exhibition. See details.

A Mile in My Shoes 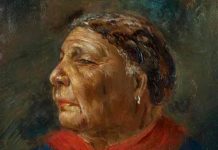 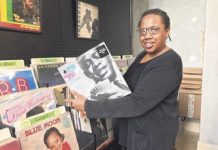 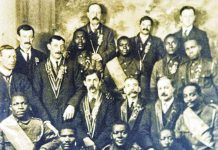