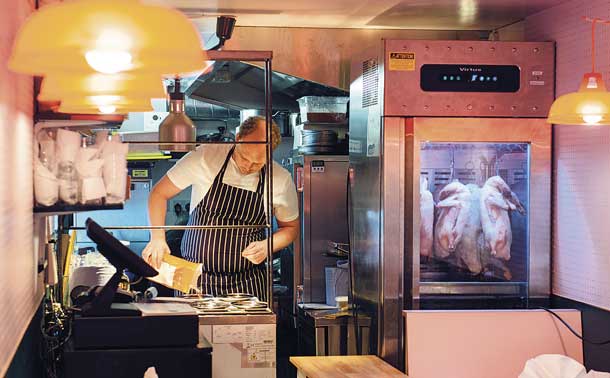 Source for the goose: Nick Buglione grabs a sitdown with Oli Brown of Duck Duck Goose

It’s quite a trip from head chef at Rowley Leigh’s Café Anglais in Bayswater to a shipping container in downtown Brixton. And the oven’s playing up.

Duck Duck Goose (yes, is a take on the children’s game) is the latest culinary arrival at Pop Brixton, via the street cafés of Hong Kong. It was there that Oli Brown fell in love with Cantonese barbecue meat shops and kitsch old school cantinas.

“We’d finish our shifts at The Continental and hit the local canteens, crack open some beers and stuff ourselves,” says Oli. “Some of them probably hadn’t changed in decades and I loved the theatre of the glazed hanging meats. That is my inspiration for Duck Duck Goose.”

At DDG Oli and his team will be fusing modern takes on Guang Dong province classics with traditional renditions of Cantonese cuisine. “The menu will be ever-changing and is a combination of reinventions like our prawn toast revisited alongside very traditional roast meats and steamed fish. Cantonese cuisine is all about ingredients being the star of the show, aromatic flavours with lots of star anise, spring onions and ginger. Packed with flavour.”

So expect glazed duck, pork and goose that will be air-dried and roasted on site in a custom-built air dryer and duck oven, whole steamed sea bass and offbeat offerings such as turnip cake with ceps. And the new wave prawn toast with its indulgent wedge of prawn mousse, deep fried and topped with kewpie mayo, endive and pickled kohlrabi.

The clue is in the name though – the stars of the show are the birds. “We air dry our duck and goose for three days which allows a lovely fusion of crispyness and moist, succulent meat. In Hong Kong they actually serve more goose than duck, they like the fattier, gamier flavour.”

It’s a pretty stylish container, a playful take on the everyday style of the Cha Chaan Tengs, the Western hybrid cafés that sprang up in post-war Hong Kong. Think orange pastel kitsch with on-trend low hanging butcher lights and wipe-clean vinyl – with the theatre of the air-drying birds in their hi-tech glass casket.

So why Brixton? “I am friends with Will from Kricket and he suggested it,” says Oli, while acknowledging the roll call of Brixton pop-ups that have catapulted wider from their south London start-up.

“This has only been possible through the support of my wife and friends who have invested and been really supportive. It’s an accessible entry point compared with a normal site but, roughly speaking, we hired a tin can with nothing in it so it’s a big jump from the kitchen at Café Anglais with its 30 chefs.”

Once upon a time Chinese cuisine was just anglicised fusion “Chinese”. Operations like Duck Duck Goose excavate further down into the pleasures of regional oriental cuisine, dicing them up with modern twists. Just need to fix that oven.