The Design Festival takes place in September and planning begins later this month. Organisers want to share plans for a week of spectacular transformations of Brixton’s streets and public places with the wider community.

“Rebel Rebel”, this year’s theme, is designed to engage the community with installations, exhibitions and events by resident artists, designers and creative organisations in public spaces and businesses in the town centre. 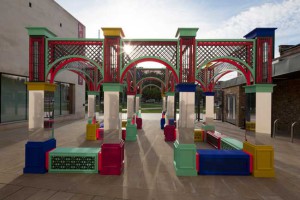 The Brixton design trail youth team will design their own programme of activity, giving young people a platform to express their ideas and talent.

The 27 April event starts at 6pm with a short presentation, followed by drinks until 9pm.

Brixton BID director Michael Smith said the plans were “an opportunity for Brixton to open up to the world with the Rebel Rebel 2016 Design Trail. Brixton has the potential to be the most creative design district ever”.

Established in 2003, its role is to celebrate and promote London as the world’s design capital and gateway to the international design community.

Brixton will be officially announced as the newest Design District during a media launch at the Victoria and Albert Museum in early May.

No borders protest marches up Brixton Hill to Brixton Prison