POP Brixton has been accused of charging rents that are far to high for small businesses to afford.

One owner told Brixton Blog that for a small unit he was quoted a rent of £900 plus per month, a figure that “no beginner company could likely pay”.

The “community campus for startups, small businesses, local entrepreneurs and community organisations” on Pope’s Road, on the site of the ice rink and car park, has recently closed the first round of applications for enterprises to operate from shipping container units.

The project, formerly Grow:Brixton, will have control of the site until at least October 2017.

Stuart Everitt, director of Marmalade Productions a small film production company in Brixton, said that he was attracted to POP Brixton because it was sold as a community venture with opportunities for smaller businesses to find a home with reasonable rents.

Everitt said: “There was an enormous application process but there is no actual indication of what the rents would be.”

“I inquired personally and was told there are a range of prices depending on the size of your project. However, after I applied I was told that to rent a container for six people it would be £900 per month, and that didn’t seem to include VAT, electricity, internet, etc.

“That is a hell of a lot of money,” he said. “I just can’t afford that and I don’t know many startups who would be able to either. It is a lot for what is essentially a storage container in a car park.” 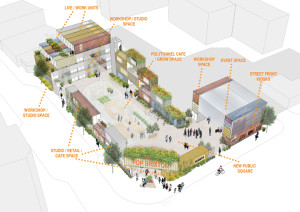 “I’m going to have to look outside of Brixton which is really sad because I live here and I make films here and I want to be able to interact with my local community.”

However, POP Brixton have said that the issue of rents is more complicated than that.

Philippe Castaing, commercial director of POP Brixton, said: “Yes, some businesses will be charged top prices – on par with rents across Brixton at the moment – but others won’t be.

“The commercial rent will support the startups and community events and programmes in POP Brixton.

“We don’t have precise figures of how many will be getting the cheaper option and who will be paying more right now as we have only just closed the application process.

“We can’t do social enterprise unless we make money. Unless you charge a lot to people who can pay it, you can’t support the smaller and community-based businesses.

“There is an obsession over how much we charge per unit but it is bigger than that, it is how many jobs are we creating here, how many hours of free community workshops are we doing – that’s what people should look at. ”

A spokesperson for Lambeth council said: “Tenants will be gaining access to a flexible unit at the heart of an innovative incubator project. The containers are fully insulated and double-glazed. The rental changes also cover a range of facilities including site security, 24-hour access and cycle storage.”

“Demand for the units has well exceeded supply. The potential successful tenants will be notified shortly and a waiting-list will be put together for those who still want space.”