Their destination is the mid-century masterpiece of Stockwell Bus Garage. Described by author and journalist Will Self as “a pod of whales, a concrete Leviathan, frozen in mid arch as they swim through the rather choppy brick sea of south London”, Self presents a compelling case for Stockwell Bus Garage as London’s most important building.

You may wonder what could possibly merit this status  – a building that you may never have heard of and almost certainly never visited? This overlooked piece of post-war archi­tecture was designed by Adie Button and Partners and opened in 1952. Its 125-metre roof structure, formed of ten, extremely shallow “two-hinged” arched ribs was Europe’s largest unsupported roof span at the time of construction.

Come nighttime, the garage is the resting place of 200 buses, meticulously parked in the 73,350 square foot bedroom-cum-playground. 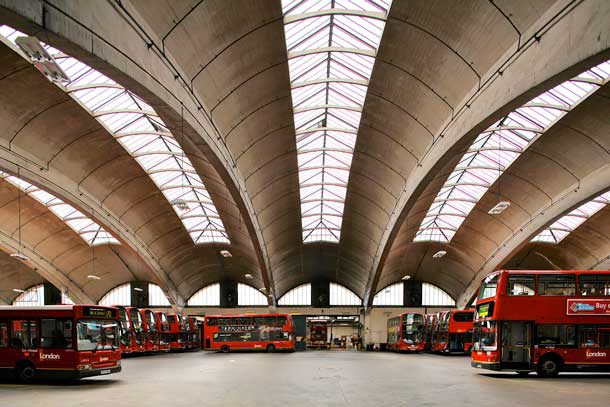 Such a vast internal space dwarfs the buses. Self draws parallels with Rome’s aged marvel, the Pantheon (118-128AD): “the skylights are reminiscent of the Pantheon’s high central opening, the oculus … Unfortunately, unlike the Pantheon, it’s not a public meeting place for people but for buses, where buses talk unto buses, where buses mingle in their bus togas and discuss affairs of bus state.”

The building is a tour de force of reinforced concrete, in keeping with the aesthetic of the post-war construction period and the Festival of Britain of 1951. As a fully functioning, garage, where the buses that frequent our London streets set off from and return to each day, it’s no museum for everyday perusal.

Yet it’s hard to disagree with James Pallister of Architect’s Journal: “The familiar, the competent and the mundane are too often underrated in architecture.” Or, as Self puts it: “Signature buildings are just that to me, signatures. I want to hear more about the text”.

The building, a local icon, came to my attention in the Twentieth Century Society’s book ‘100 buildings, 100 years’.  The book vividly recounts the striking architectural variety built between 1914 and 2014, with Stockwell Bus Garage representing the year 1952.

Here’s to the buildings in London built for and used by the people, that are highly worthy of praise.