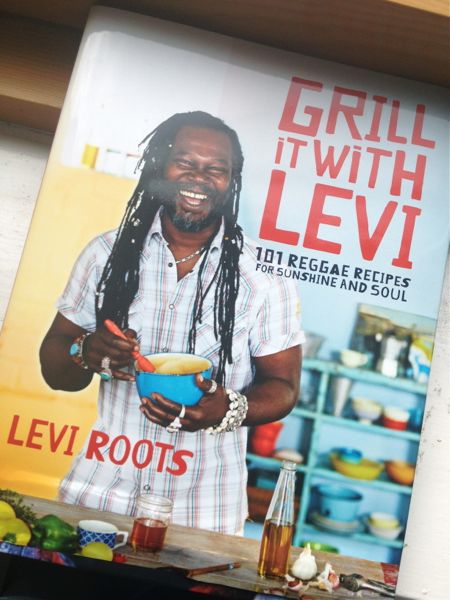 Last week, I was lucky enough to get the chance to sit down and chat food and Brixton with probably the most famous food entrepeneur in the area, Levi Roots. The creator of Reggae Reggae Sauce, author of five books, musician and the person to introduce British supermarket shoppers to Caribbean food, for anyone interested in food in Brixton, he’s a fascinating man to meet.

I was there to talk about his most recent book Grill it with Levi which is published this week, but it became immediately apparent that you can’t separate his cooking from the other strands of Levi’s life and you certainly can’t take the influence of Brixton out of his life. Originally from Jamaica, he’s lived in Brixton for 40 years and they’ve changed and grown together.

It’s impossible to talk anyone who lives in Brixton these days without discussing the recent changes to the area. Unlike many people, Levi seemed generally positive about the fact that Brixton has changed enough not to only be associated with the negativity of of the 70s, 80s and 90s, but actually become somewhere people want to visit rather than avoid. He sees change as a progression taking you from one place to another, while understanding that journey can be difficult as your feelings of familiarity are challenged.

Levi believes ‘change depends on what you expect’ and thinks it needs to come from within the community of the area as well as externally because as he sees it, people need to ‘step up to belong’. He attributes his great success to coming from Brixton and being surrounded by strong community where people have to really show their best. He still lives in the flat he was in before his Dragons’ Den success and gets his food in the market. He sees Electric Avenue as ‘the spine of Brixton’, alive with sounds, smells and the feel of the people and produce. As you walk down this street you see it all and can buy it all.

He thinks this outdoor soul is what makes Brixton unique. It’s a connection for many of the communities here, especially the Caribbean community and it is one of the inspirations for Grill it with Levi, which concentrates on the traditions of outdoor cooking, barbecuing and grilling in Caribbean cooking. Levi feels this is the book that is closest to his heart and the one most inspired by Brixton with its summery, musical feel.

Featuring recipes Levi thinks sums up his background as a cook, the quality ingredients Brixton market offers and the idea that cooking doesn’t have to be complicated, the book has suggestions for everything you need sample a taste of summer. I started by making the banana ketchup and the jerk squid and after dipping into the bottle of rum Levi recommended (Wray & Nephew Overproof White Rum), ended up buying a barbecue. Now all we need is some proper sun over Brixton so I can practise my technique!

Grill it with Levi: 101 Reggae Recipes for Sunshine and Soul is published on May 9th by Ebury Publishing. It is available from today at Herne Hill Books with a 10% discount.