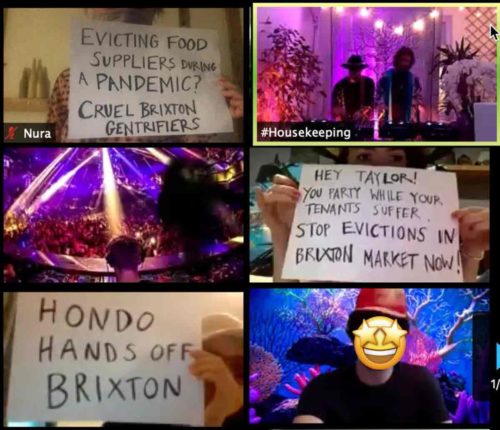 Protesters against the threat of eviction of Nour Cash & Carry from Brixton’s Market Row crashed into a Zoom and Facebook DJ set by the owner of Hondo Enterprises which runs Market Row and Brixton Village.

Taylor McWilliams, the sole director of Hondo, is also part of the DJ collective Housekeeping, who were appearing at a Zoom party on 25 April to raise money for the Red Cross hosted by the renowned Ibiza club Pacha, attracting thousands of fans.

When Housekeeping’s set began, protesters dressed as partygoers held up signs and flooded the live chat in protest against Hondo’s activities in Brixton market. 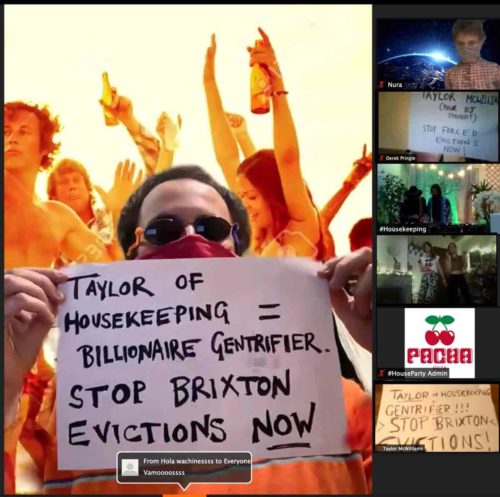 Hondo has taken legal steps to evict Nour Cash & Carry, which has been serving the local community for more than 20 years. It is understood that negotiations are continuing.

A spokesperson for Hondo said: “Hondo are not carrying out any evictions at this time and have been in discussions with Nour for almost a year.

“Hondo have invested extensively with regards to heating, drainage and the infrastructure within the Market, however, the lack of power still remains a major challenge with regular power cuts for the 50 traders in Market Row.

“In order to support all a traders, we are required to build a new electrical substation which UK Power Networks informed us had to go in Nour’s unit.

“After exploring a number of solutions for Nour Cash and Carry, including Hondo building a new unit for them at our cost, we are pleased to be in the positive, final stages of discussions to retain them within Brixton Market. We hope to have details of this agreement very soon.”

Nour has been donating to food banks and delivering parcels to isolated customers during the lockdown.

After a few minutes of dominating the chat, a new moderator was added to the call and the activists were removed.

A second wave of messages came at the end of Housekeeping’s set. The Facebook livestream was briefly stopped in an effort to get rid of the activists.

One activist who took part said: “By pressing ahead with evictions without proper community consultation, Taylor McWilliams, who owns 100% of Hondo Enterprises, has avoided scrutiny. 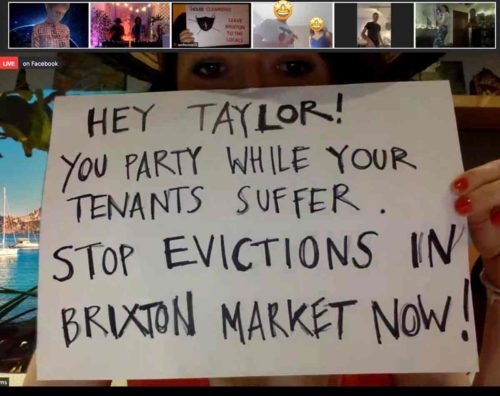 “We crashed his party in protest against the evictions and to show him that the local community are watching him, even if he wants to appear in the guise of a fun-loving DJ.”

Nour is a vital resource for Brixton, serving 90% of restaurants in the market and surrounding areas and drawing footfall to neighbouring traders.

More than 4,400 people have signed an online petition in support of saving the business.

Hondo is planning to build a 19-storey office and mixed use tower block next to Brixton Village.

Art trail is response to devastating 2013 flood in Herne Hill