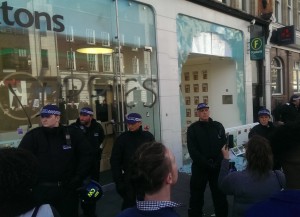 Violence erupted on the streets of Brixton today in the wake of an initially peaceful protest against gentrification in the area.

The window of Foxtons estate agents in Brixton Road was smashed, Lambeth Town hall was stormed and CS spray gas was used to deal with protesters at the police station.

The organisers of the Reclaim Brixton rally had insisted they did not want trouble and for most of the afternoon the crowd of more than 1,000 people who gathered in a sunny Windrush Square, was content to wave placards and play music. 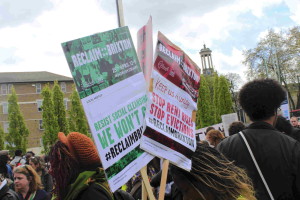 The rally had been organised to show the anger in the community at the rapid changes in the area, with locals being priced out of the housing market and smaller, individual businesses being driven out by high rents and big business.

However, at around 3.15 pm, some protesters managed to get inside Lambeth Town Hall. No damage was done and they were quickly removed by police officers. No arrests were made.

Around the same time, other protestors smashed one of the windows of Foxton’s estate agents and the words “Yuppies out” were written in spray paint across the other window. Police officers arrested one person on suspicion of criminal damage. Foxtons in Brixton has become a symbol of the gentrification of the area and this was not the first time it has been targeted.

It was also revealed that CS spray was used on “a small group of protesters” who went into Brixton Police Station at around 4.10pm. Police said the protesters were removed by local officers and “CS spray was deployed”. Again no was arrested though police said they were continuing to make their presence in Brixton tonight. 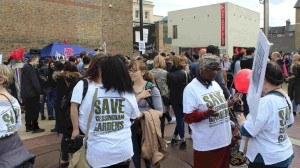 The afternoon had begun peacefully, however, with housing forming a key focus of the protest: campaigners from Cressingham Gardens and Loughborough Park Estate waved banners asking for “social housing, not social cleansing”.

The London Black Revs, a socialist activist group, had also organised a march through Brixton and Brixton Community United, the campaign to save the businesses under the railway arches, organised a human chain around their properties. They then marched to Windrush Square, leaving their shops closed – “a sign of what’s to come” said Lorne Mash, from Mash & Sons fishmongers.

Valerie Lindo, who grew up in Brixton, said she was at the protest to show the council and government that they are “selling out” the area’s poor people.

“We need more affordable housing, the extreme house prices are moving people out of Brixton. It is social cleansing and breaking up communities. Brixton is losing its originality, we don’t want it to turn into Wimbledon or Richmond.”

Employees from Brixton Cycles, a worker owned bike shop that has been in Brixton for over 30 years, were also at the demonstration. Their current premises are being demolished and the rising house prices mean they will likely be forced to leave the area.

Sarah, who works there, said “its scary what’s happening here. We came here to support everyone, there are so many who are facing similar problems to us.”

Georgie, who also is an empolyee at Brixton Cycles, added: “Gentrification seems unstoppable but we won’t stop fighting.”

In the wake of the violence that erupted today, many campaigners fear that the vandalism that occurred at the town hall and Foxtons would overshadow the positive aspects of the rally.

One social media user, Miss South, tweeted that she was “furious” that Foxtons had had its window smashed in  -“not because I like Foxtons at all but it allows Reclaim Brixton to be devalued.”