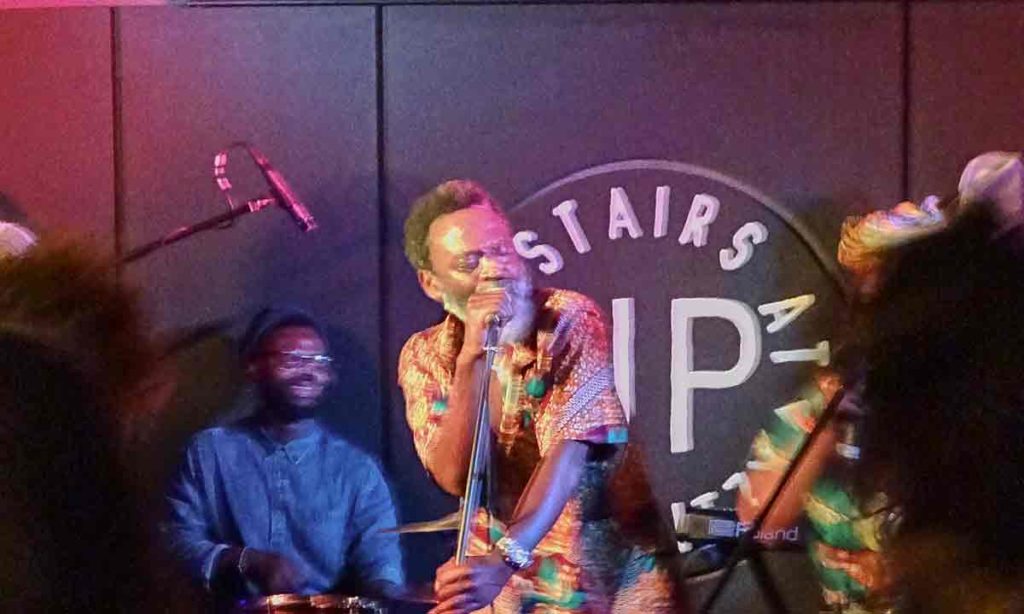 Jazz musician Gordon Wedderburn aptly described the new look of Brixton’s Upstairs at the Ritzy bar as an “Afro-centric refurbishment” after it fully reopened its doors with a party.

The bar above the Ritzy cinema was also celebrating its 10th birthday and played host to GW Jazz and the Yaaba Funk band.

Gordon Wedderburn, who set up GW Jazz with his wife Gillian in 2009, was one of the first musicians to play at the bar when it opened and has retained strong links to it ever since.

The event last week was the first since the start of Upstairs’ refurbishment that all areas of the bar were open and visitors were treated to a beer from Brixton Brewery on arrival.

The renewed venue in its prime site on Windrush Square has a modern feel.

While vinyls spin upstairs, vines twist and turn around sofas downstairs and through the staircase in between.

Picture discs turned into posters from years gone by line the walls and old brochures advertising Brixton theatre remind vistors of the artistic talent that the district has nurtured across many decades.

The bar is not just a hub for music. As you walk upstairs, you are instantly hit with a warm and friendly atmosphere. Many people at the launch party already knew each other.

The first floor has seating and mood lighting, while the second is for the music. The decks for the DJ are next to three big glass doors which back onto a terrace overlooking the impressive St Matthew’s church, helping to create a spacious and comfortable environment.

Gordon Wedderburn – “We are Jazz” was emblazoned on his jumper – started off musical proceedings, drawing people upstairs from the decks before the live acts.

Yaaba Funk were formed in Brixton in 2006 and fuses funk, afrobeat and Ghanaian hi-life. Their name originates from the sole album released of Ghana by musician Captain Yaba – Yaba Funk Roots.

The eight-piece played for the best part of two hours, engaging with the crowd throughout as they got them to clap, dip and then dive between each beat. The two singers spilled onto the dance floor and carried on the show at full throttle.

GW Jazz combine with Upstairs to promote talented young musicians and reminded listeners that Mark Crown, who has played trumpet with Brit and MOBO award winners Rudimental, was given a stage to promote his music at Upstairs.

A bidding young musician might be wise to get in touch, to groove to some funk, at least.

Everything I need is on my doorstep …