It was a sunny Saturday when people of all ages joined the Brixton BMX Club open day in Brockwell Park – an opportunity for beginners to get on a bike – run in partnership with the charity Access Sport and British Cycling, the national governing body for cycle sport.

Steph Waters, BMX delivery manager at Access Sport, said: “Our aim is making cycling inclusive for women and for those with disabilities and under-represented groups and that is where we work with community clubs.

“Brixton BMX is a great example of a community club with people from all walks of life that support us with women-only and disability sessions as well.”

Professional trainers were on hand, including Tre Whyte from Peckham, a member of the Great Britain BMX senior squad, and his brother Kye.

Tre said: “It was an inspiration when I saw the first BMX jump in Brockwell Park. It was like flying and I wanted to do that. I started winning races and it made me want to venture on. You have to be fierce and get up when you fall on a BMX. Just be confident, pick up and do it again.”

Silvi Vargas, a BMX teacher at Brockwell Park, will be representing Great Britain at next year’s BMX World Championships in Houston, Texas. She started riding when she was 10 after watching Colombian Mariana Pajón win an Olympic gold medal.

“I knew BMX was for me! I started training in Brockwell Park in 2017 when the track was redone by Access Sport. I started riding at least three times a week.

“I became part of Access Sport last year because I wanted to encourage more riders to get started – especially women and girls. BMX is a very male-dominated sport and I believe there needs to be more visibility of women and girls in the sport and more female coaches.”

She is also doing a coaching apprenticeship with Access Sport to encourage more riders to get started – particularly women and girls – giving them the support she lacked when she was growing up.

Silvi said: “Helping other young girls get active and enjoy cycling is such a massive passion of mine. Often, kids in Brixton are already interested in cycling – doing tricks and wheelies near where they live – but it’s so important to give them a safe space to practise as well as positive role models.

“I’ve worked with a group of girls who had been excluded from school. Watching their joy as they realised they could do it and seeing their confidence build from week to week was absolutely amazing.

“They realised that they’re part of something positive and that they have support to make something of themselves now, and that’s really powerful.

“I really hope that more people will join us and give BMX a go. The thrill of BMX is guaranteed to get your heart racing, and the health benefits it brings are amazing too.” 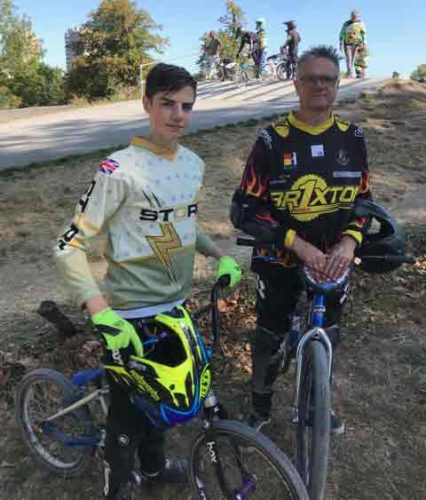 Mike Woof (left), Brixton BMX press officer, puts his money where his mouth is and is involved in riding alongside his two sons Otto and Tom.

Tom said he had worried about his dad but that they both love it. “I started BMX because my brother did it. I saw him on a track when I was three years old. It was the adrenalin that attracted me and now my Dad and I join each other racing.”