The BMX race track at Brockwell Park was host to Round 5 of the 250 London Series BMX on Sunday 3 September. Mike Woof, Brixton BMX Club reports.

Brixton BMX riders had a strong turnout for the race, with 25 out of 185 riders registered. Other clubs taking part including Barking & Dagenham, Ealing, Greenwich, Hackney, Hammersmith, Hayes, Merton and Peckham as well as from further afield including Bexhill, Bournemouth, Braintree, East Kent, Gosport, Gravesend, Knightwood and Runnymede.

The riders registered to race according to age and experience – from novices aged 7 and under to experts over 30. The oldest rider competing was Braintree’s Paul Mounsey, a sprightly 70 year old, proving that age is no barrier to BMX racing.

Racing was hard and fast, with riders showing their particular skills. The last race of the day was for Male 16+ Payback, with a particularly competitive group on the gate. Brixton’s own Jeffrey Rojas won the final convincingly, ahead of George Newell from Hayes Hawks and Jason Lewis, also from Brixton. This followed some particularly fierce racing between Gosport’s Connor Blyth, Peckham’s Mike Pinnock and Brixton’s Jason Lewis, these last two changing places on two of the berms, before Lewis finally managed to shut Pinnock out on the final berm. Overall on points however, the three motos (heats) were counted leaving Jeffrey Rojas in first, with Mike Pinnock in second and Meeshaq Malone from Hackney in third.

First Aid Cover Limited gave first aid support for riders. One of the 17+ cruiser riders did take a nasty fall on the first straight in his final but was not seriously hurt. Find out for about Brixton BMX club here. 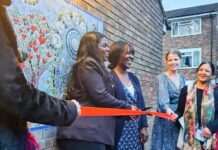