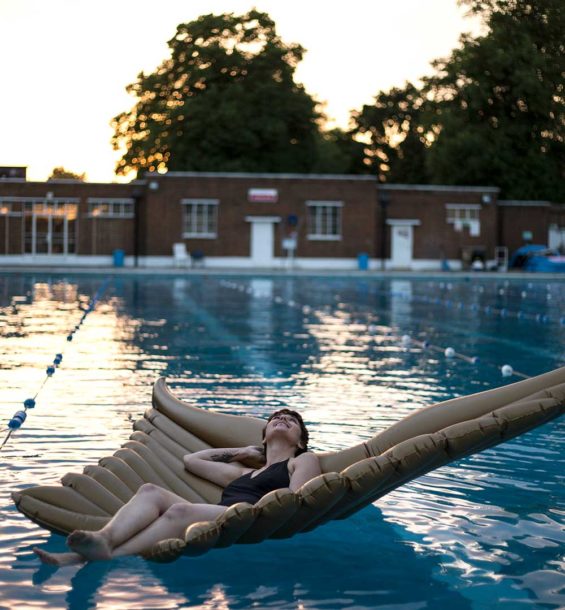 Well, nice idea folks, but you’ll probably have to join that monster queue snaking round Brockwell Park and risk a touch of heatstroke in the meantime, cooling off not being the most original of ideas right now.

Or, as locals in the know, you could always enjoy its many charms without the crowds and general frenzy at one of its new out of hours ‘Lido Lates’.

Launched this summer and running through to September (check the Lido for dates, they’re a bit random but in August they’re on as many nights as not), from 7.30 to 11.30pm they’re a perfect chance to enjoy a moonlit swim.

There’s a party atmosphere starting when you’re handed a glo-stick on entering, which my husband particularly enjoyed, and the lido is adorned with flamboyant floats, fairy lights and fountains. 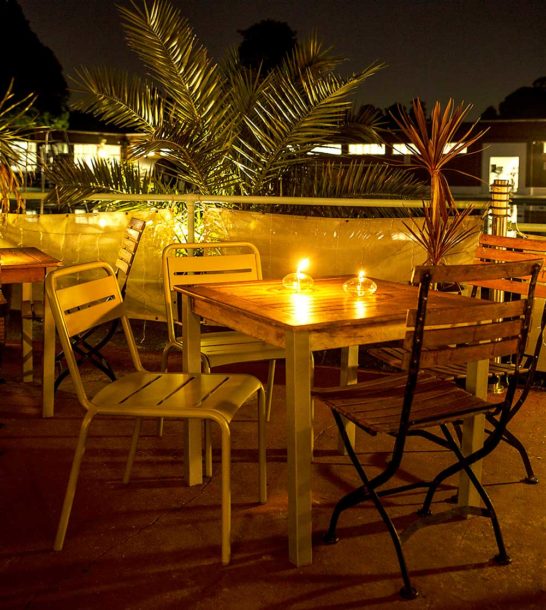 Snacks are served in seaside-style cornets. Choose from “housemade” pork scratchings, beer-battered deep-fried dill pickles with chilli mayo and popcorn shrimp alongside a nice smattering of creative small plates. They all hit the spot being moreish and just the kind of high-energy classy carby grub you want when you’ve been for a dip in that 50m “Olympic” pool. But the fried pickles had the edge, in an “I’m still dreaming about them days later” kind of a way.

Afterwards, you’re basically looking at burgers, no bad thing especially when all dietary variations are catered for in a classic Longhorn beef burger, jam-packed veggie burger with piquillo peppers and chipotle mayo and vegan burger in a charcoal bun.

All come with an inspired side of curry spiced fries redolent of chip shop curry sauce. Which is a taste of wonder in my (northern) books. 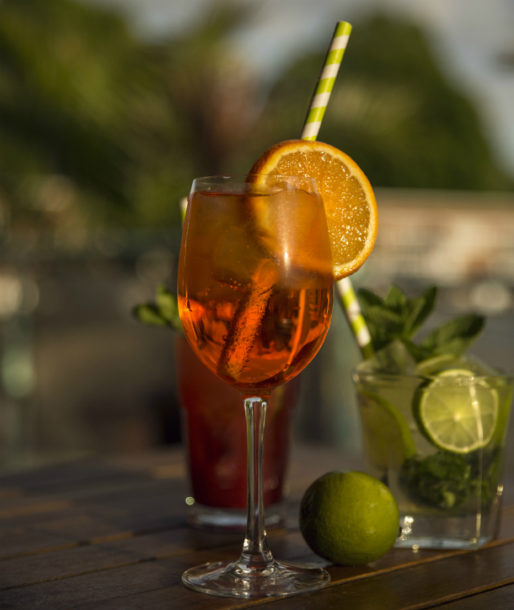 The drinks are equally fortifying. “well-being shots” such as turmeric hit and carrot cooler pave the way for summery cocktails like elderflower spritz or an innovative rosemary paloma with tequila, fresh pink grapefruit juice, lime, salt and rosemary syrup.

So basically you could just sit and eat and drink by the pool as the sun sets, taking advantage of the fact the maximum allowed in is 120 (which is lovely in itself), but to really get into the spirit (and make the most of the £20 entrance fee) you really should take a dip. Especially when its been warmed up through the day by the baking sun. It’s over-18s only so you (probably) won’t get dive-bombed by little rascals.

In fact, as drinks aren’t served poolside, but on the restaurant terrace, the night we went people seemed to swim, relax on loungers and hit the cute little wood-burning aromatherapy sauna hut before drying off and heading to the candlelit poolside tables to eat and drink.

As it gets nearer closing time, staff lay out fetching pink rugs to snuggle into. All very civilized. Now if only I can get hubby to part with that ravey glo-stick …