Dwaynamics’ Pastor Lorraine Jones continues to fight against youth violence following the death of her son Dwayne Simpson who was killed in Lambeth as a result of knife crime in 2014. 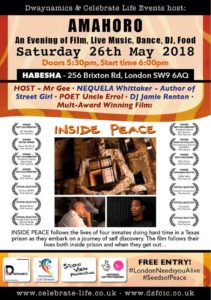 The first event is Amahoro, an evening of film, music, dance and food, at Habesha at 256 Brixton Road SW9 6AQ (formerly home of BXT/Frat House). Doors open at 5.30pm this Saturday (26 May).

The event will include a showing of the film Inside Peace, a documentary that follows a group of inmates in Dominguez State Jail in San Antonio, Texas, on a journey of personal discovery as they struggle with society’s roadblocks and dangers.

Described as “a window into the hearts and minds of … men who chose to break this life-long cycle of negativity”, it features the Peace Education Programme developed by the Prem Rawat Foundation.

Inside Peace follows the men “as they learn to reintegrate with life by relying on the self-worth, inner strengths and understandings discovered in the Peace Class”.

Outside prison, life “becomes more treacherous as they try to live in a world filled with conflict, rejection and hostility”. They must fight the temptations that led them to prison in the first place.

As well as the film, there will be music from DJ Jamie Renton and multi-instrumentalist Tito Gomez, along with words from South Londoner Nequela Whittaker, author of Street Girl about gang culture, and poetry from Uncle Errol –  Errol McGlashan, a spoken word artist and performance poet who was once a repeat offender.

The second event, Seeds of Peace, at Lambeth College’s Clapham Common site on Sunday 10 June, will showcase young local talent with music, dance and spoken word. There will be information stalls and a chance to network.

The three organisers of CLE met at an event in London in 2009. One, Wallee McDonnell, was a full-time advice worker for the Refugee Council at its former offices in Brixton in what is now the Department Store. CLE’s launch event in 2011 was at Hideaway in Streatham.

The Lambeth College Event is free and begins at 5pm. Doors open at 4pm.

Because of limited space it is an entry-by-ticket-only event.

To obtain a ticket email:

The organisers ask that you include the following information in your email:

Name
Email address
Mobile number
Organisation (if applicable)
Who, if anyone, invited you.