Mosaic Clubhouse on Effra Road is the official charity for the new mayor of Lambeth, Christopher Wellbelove, who was elected at the council’s annual meeting at the town hall in Brixton last night (23 May).

It will be the second one-year term as mayor for Wellbelove, who represents Clapham Town ward. He spoke of his own struggles with mental health and invited Paul Davies to speak to the council about how Mosaic Clubhouse had helped him.

Paul Davies said his experiences with mental health services began in 2003 and that he was “in and out of hospital” with psychoses, depression, suicide attempts and self-harm.

In 2012 he received a diagnosis that caused him to isolate himself completely.

On first going there, he was not sure for a minute that he could speak. But everyone was so welcoming and understanding that it was not long before he started to see potential and skills “that I did not know I had”.

His achievements, thanks to Mosaic Clubhouse, include working on a transitional employment placement, conducting tours of the Clubhouse for visitors, running debates for its members and external presentations on its behalf.

Key factors in his recovery, he said were dialectical behaviour therapy and Mosaic Clubhouse.

Paul Davies thank the mayor for choosing it as his charity and urged anyone who wanted to know more about it to visit – “It’s only round the corner” or check its website.

His contribution was, in contrast to earlier proceedings, heard in silence and enthusiastically applauded by protesters in the public gallery from the Shirley Oaks Survivors Association, some of whom had travelled long distances to be at the meeting, believing that their case was to be discussed.

They were assured that it had never been on the agenda for the council’s annual meeting that is solely for elections and administrative business connected with running the council.

The protesters, whose interruptions led to two suspensions of the meeting and its eventual removal from the council chamber to a private room, were also silent to hear mayor Wellbelove’s second guest, singer and drag artist Mrs Moore, who performed “Just Can’t Take It Any More”. 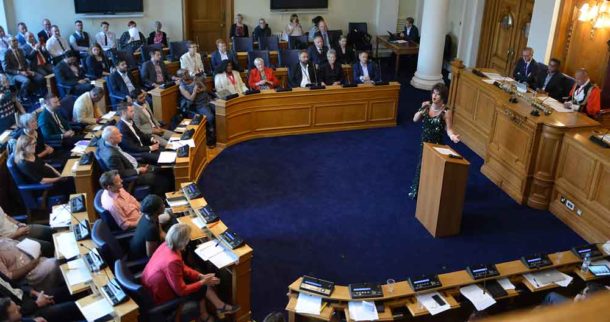 At the reconvened council meeting, the five newly elected Green party members of the council, who are now the opposition group, called for a vote on a proposal by the ruling Labour party group to increase from one to five the number of councillors required to refer (“call in”) a decision to its scrutiny committee.

Labour councillor Ed Davie, the outgoing chair of the scrutiny committee, said that Lambeth had the “most permissive call-in system in the entire country” and increasing the number of councillors required to call in a decision would bring it in line with neighbouring councils.