A long-established and well-loved Railton Road business fears that it faces an enforced move from its current prime position and a big rent increase from its landlord Network Rail.

The Flower Lady florists has stood next to Herne Hill station for more than 10 years, but landlord Network Rail wants it to make way for an electricity sub-station providing power for arches that it has refurbished at the Brockwell Park end of Railton Road – or Station Square as it is now known to some.

Being right next to the station is essential for the prosperity of the business.

Sarah Middleton, the daughter of The Flower Lady owner Elaine Partleton, said the arches premises had been closed for two and a half years, but that Network Rail had not used this time to organise a proper power supply.

“Yet again Network Rail show a complete lack of understanding and interest in our local community, along with a total disregard and inability to recognise the importance of continuity and location for an established and much loved local business,” she said.

The company says that it is still investigating the siting of a new sub-station and that it will keep Elaine Partleton and the local community informed. There is already a sub-station next to the Flower Lady shop, but inside Herne Hill station.

Sarah Middleton said that because planning and building in Herne Hill had not been carried out correctly, Network Rail had been left with buildings that did not have a sufficient electricity supply, leaving the only option to build a sub-station nearby.

She said the landlord’s solution was to “move” The Flower Lady from the old Victorian coal house it now occupies, demolish it and build a five-metre square sub-station – right next to the one already on the station premises.

Sarah Middleton said that, at a meeting with Network Rail last week, it had been “very clear” to those who attended that a decision had already been made.

Elaine Partleton was offered a shop some distance from the station and at a rent forecast to be double what she pays currently.

And, as she would be moving into a “shell” property, she would also have the considerable expense of fitting it out. The new units do not even have taps or basins.

A Network Rail spokesman said that the company was continuing to view all of its options and that the unit offered to Flower Lady was near the current premises and would not double the shop’s rent.

He said that Network Rail was “looking carefully at suggestions made at a meeting with our tenant last week, as well as reviewing other options that were previously considered. We are doing this as quickly as possible in order to be in a position to update our tenant.”

He said that Network Rail would continue to keep Elaine Partleton, as well as local councillors and other community representatives, including the Herne Hill Forum and Herne Hill Society, up to date on its plans.

He said the units have not been let yet and would not be let to national chains.

Part of the community

Elaine Partleton is not only a valued local trader. She is part of the community, supplying power and water for street parties and festivals like the current Herne Hill Free Film Festival and the farmers’ market. People call greetings to her from the other side of the street or cross it for a chat at frequent intervals.

The Flower Lady provides the local Christmas grotto and Elaine is the key-holder and general custodian of Herne Hill’s famous community piano.

She already has the support of neighbours Katya from Llewellyn’s restaurant and hair salon Myla & Davis and Nikki from Herne Hill Books, along with Becca Thackray, the newly elected local Green Party councillor.

Elaine said that, until local councillors and others had got involved, the only contact she had had from Network Rail was by telephone or unannounced personal visits, with nothing in writing.

She got her first email about the plans to move her only after Network Rail staff had visited her and found her accompanied by neighbours, her daughter and councillor Becca Thackray.

If Network Rail thought she might give up her shop easily, the company is in for a surprise.

Elaine started selling flowers outside the Half Moon pub 11 years ago before its owners, the Dulwich estate told her to stop. She was invited to move into the disused woodyard that is now Off The Cuff. From there she moved to sites both inside and outside the station with both assistance and obstruction from Lambeth council and others.

In April 2008, she moved in to her current premises – which had been a barbershop – after its owner came into money and wanted Elaine to sell her flowers from there.

Network Rail had planned a straightforward refurbishment of the Victorian façade of the Herne Hill arches, including those at the rear of the station on Milkwood Road, although they were known to have structural defects.

The work took much longer than expected because of the need for extensive additional structural repairs that Network Rail says were identified only after the building had been stripped out.

Although initial surveys were made to check the need for new power provision for the planned uses of the units, it was only at the final design stage that Network Rail and UK Power Networks (UKPN), the network operator for electricity in London, discovered that not enough power was available to enable occupation of all of the units.

UKPN told Network Rail that the power requirements for the final three units could only be satisfied by building a new sub-station.

Network Rail says that it is currently investigating the suitability of various locations for a sub-station as well as costs and timescales. 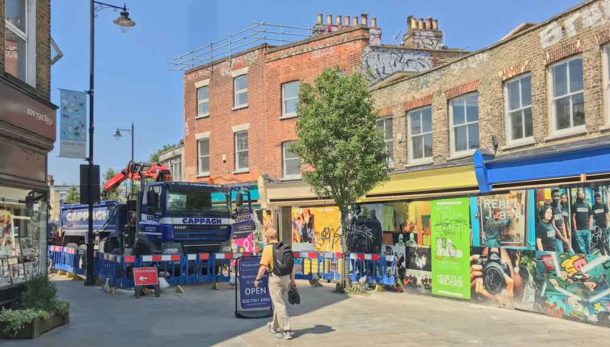