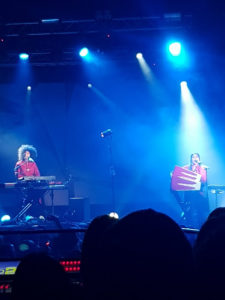 Red boiler suits are perhaps not what you might have pictured French-Cuban twins Ibeyi to be wearing when listening to their shimmering electro soul-inflected jazz album. Yet that’s exactly what they’ve gone for, as they stride confidently onto the stage at Brixton Electric to showcase their new album, Ash, distinguished only by Lisa-Kaindé’s afro and Naomi’s dangling braids.

Unexpected influences are a key theme in their critically-acclaimed, genre-bending album, which combines traditional Afro-Cuban beats with thoroughly modern influences from electronica, soul, jazz and hip-hop. It’s a deeply personal work, reflecting on their experiences of gender and racial inequality.

This is thrown into sharp relief on stage, where live performance gives the sisters’ strong vocals and tightly woven harmonies an added raw, emotional weight that takes you beyond the slickly-produced album. They interjected songs with explanations of who the pieces are dedicated to – their mother, sitting in the audience, or a lullaby for the niece back home they don’t see as much as they’d like.

On stage, they have an easy charisma, inhabiting the space and deftly switching between instruments and languages – perhaps to be expected for the daughters of celebrated Buena Vista Social Club percussionist, Anga Díaz. They stride up and down as though they couldn’t be more comfortable anywhere else, bringing the audience and their gospel backing choir together through singalongs.

When live performances can too often be jaded musicians faithfully reproducing their album on stage, the sisters’ raw emotion and personal stories make for a uniquely captivating experience.