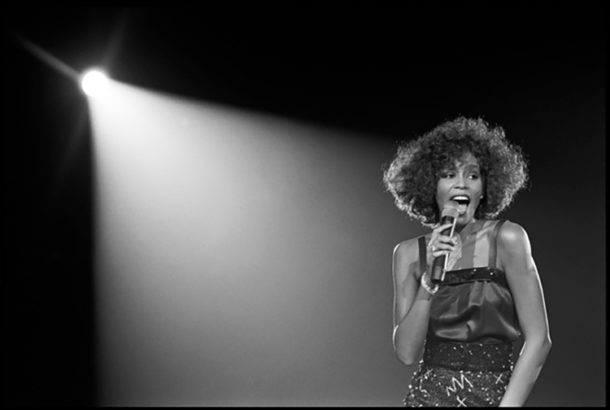 Nicola Jones reviews Whitney: Can I Be Me

Music documentaries may seem like they are a momentary trend, but they have always been developing. Lurking backstage like a veteran stage mother, they pounce on our urge to peek behind the curtain and into the darkness. Mountains of archival footage and access to friends and family are common obstacles these filmmakers face.

In the case of Whitney: Can I Be Me, the disapproval of the Whitney Houston estate actually galvanized the project to fruition. The film is a compilation of archival performances, interviews with friends and family by director Nick Bloomfield, and backstage footage of Houston’s 1999 tour. This tour footage was shot by Rudi Dolezal (over 100 hours apparently) and has never been shared before.

Dolezal receives a co-directing credit for this contribution and his work provides the film’s lead thread as it continuously turns to this tour as the tipping point in the fall of Houston. After this international 1999 tour Houston would not tour again and would personally part ways with long-time friend Robyn Crawford.

Whitney: Can I Be Me explores Houston’s gospel roots and her childhood in Newark, New Jersey. With drugs as part of the fabric of her life from a young age, none of the friends or family feign surprise that she struggled the way she did. However, like someone who employs a vast entourage, she was hampered by shame and a co-dependent marriage to singer Bobbi Brown.

The most striking of this collection of interviews is that of a former bodyguard for the singer. Bloomfield presents a chronology that pivots around the 1999 tour and explores the relationships that kept Houston going. He brings in issues of race and gender that echo when Houston was booed at the Soul Train Awards in the early nineties, clearly struggling with her pop image moulded for White America.

Yet these remain broad cinematic strokes that even talking marketing heads don’t bring greater detail to. What we see is a warm, generous side of Houston, but there is a bit of heart still missing. We marvel at her vocal range and her commitment to performance, sweating on stage night after night.

Yet Crawford’s silence hangs in the balance here. We see Houston and hear her unlike before, but this documentary doesn’t grip you like you want it to.

Whitney: Can I Be Me is in theatres in the UK (including the Brixton Ritzy) on June 16.

Nicola Jones is a freelance writer whose website asophisticatednoise.com covers film reviews, trailers, and industry news. She can be found tweeting @MzJones.

Workers at the Brixton Ritzy and other Picturehouse cinemas, backed by many leading names in UK cinema, are calling for a boycott of the chain’s cinemas until it agrees to pay its staff the Living Wage. More.