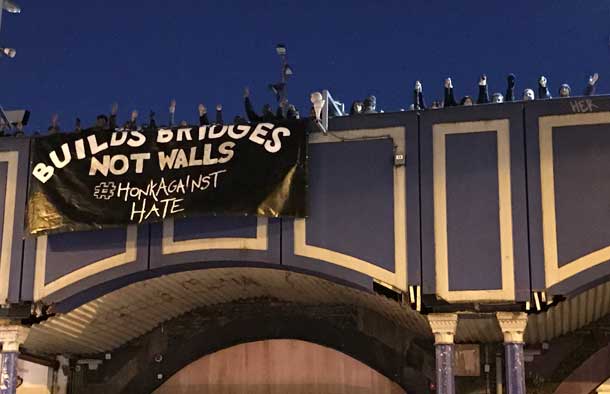 Students from the Advocacy Academy gathered in Brixton tonight to spread a message of hope not hate at the same moment Donald Trump was sworn in as US President. They took an oath of their own outside Brixton Tube, pledging to stand in solidarity against racism, sexism and islamophobia. A banner urging people to “Build bridges not walls” was unfurled from Brixton railway station on Atlantic Road.

The Advocacy Academy runs training programmes that bring young south Londoners together to develop the knowledge, skills and confidence to tackle the big issues of the day. 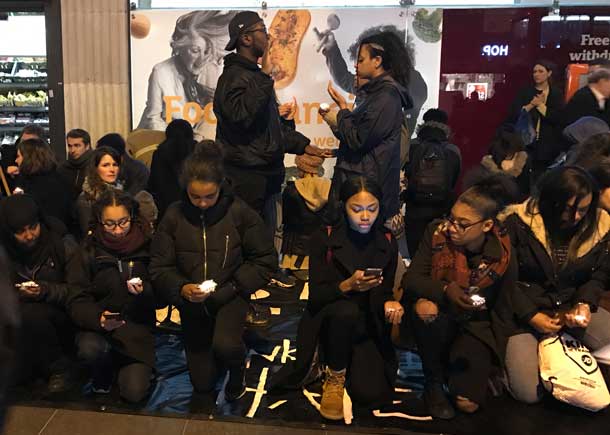 Below is their pledge:

TOGETHER: At this moment, Donald Trump is being inaugurated as President of The United States.

AMAL: We have come together to mark this moment in another way.

ZHANÉ: As young people from Brixton, we are here to express our outrage at the dangerous politics of hate and division

MALIKA: And of scapegoating and bigotry

ILHAN: To say NO to racism, sexism, islamophobia and xenophobia

AZAL: To stand in solidarity and hope with communities all over the world who need our love and support right now

PERREIRA: As we speak, Donald Trump is standing on the steps of Capitol Hill, taking an oath to faithfully protect, preserve and defend

ASHLEIGH: A promise we plan to hold him to 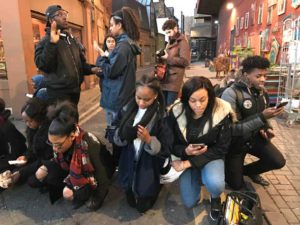 SAMANTHA: And so today, we too take an oath.

ELIZABETH: That, no matter what, we ain’t gonna let nobody or nothing turn us around.

CELINE: We’ve been down this path before and we know where it leads.

THALIA: A world of justice, equality and freedom for all people.

TOGETHER: We have built too many walls. Now is the time to build bridges.