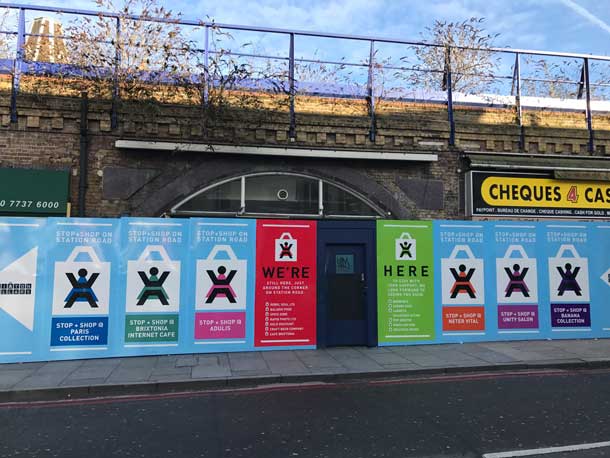 Traders on Brixton Station Road have banded together to demand action from Lambeth council on the blight afflicting the road as a result of the closure of arches owned by Network Rail.

Shop and stall holders say Network Rail has “not lifted a finger” to help them and that the council – which approved its plans – must find ways to help them as takings disappear.

Businesses in premises owned privately or by the council on the opposite side of the street to the boarded-up shops have seen their takings halved as footfall has dropped dramatically. And as work seems certain to overrun, many are worried about the future.

Claudette Jaggon who runs Bambino’s, a children’s clothes shop, said: “I took £56 on Saturday. How can I pay the rent or electricity on that? I used to take at least £200, but customs down on average by 50-60%.”

She has been left with excess stock because she ordered based on previous sales. “There’s bags of stock everywhere and I’ve no room to put it. I want to know why we can’t get a response from the council and Network Rail,: she said.

Traders are critical of what they say is the lack of support from the council and are worried about the impact of business rate rises due in April which will not take account of their loss of income. They also say that the hoardings put up by the council in an attempt to brighten the road do not go far enough.

Signage for businesses still open is too far up Station Road to draw them to anyone’s attention. One shopkeeper said his shutters had been spray painted by a graffiti artist employed by the council without his permission. 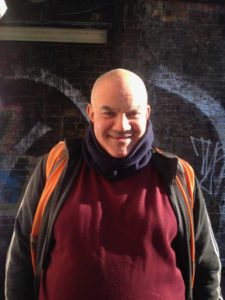 John Gordon (right), Station Road market manager, said there was still no sign of the work that was due to start in January and said he was worried that it would mean the planned 16-month work schedule will take longer.

The closures are also having an adverse affect on market traders, said Stuart Horwood, CEO of the Brixton Market Traders’ Federation. “Station Road Street market is on its last legs. If you look around this corner at Pope’s Road you can see at least nine empty pitches. It has completely demoralised existing traders. Some took the approach ‘If that’s the way it is, we’ll find somewhere else to trade on a Saturday’.”

Horwood said the remaining traders are still paying the same with no account taken of the big decline in footfall. “Recognition of this fact by the council would be gratefully appreciated. Network Rail has not lifted a finger to help the street market,” he added.

As the Bugle reported in December, Lambeth council leader Lib Peck wrote to Network Rail asking for a meeting and an explanation as to why work had not begun on the arches on Atlantic Road and Brixton Station Road.

A Lambeth Council spokesman said: “Since the letter was sent both councillors and council officers have met with the traders several times, and work has already started on putting up hoardings to improve how the street looks, fixing street lighting and gathering evidence on the impact on footfall.

“We’re arranging a meeting with Network Rail and are prepared to help businesses with a business rates appeal, which has to be made to central Government. The council is also working to support the Brixton Bid’s #OpenforBusiness campaign to boost trade in the area.”

A Network Rail spokesman said it had to wait for the outcome of a legal challenge to its plans by some arches leaseholders.

Lambeth tenants of Network Rail are not the only ones complaining. Small businesses in Hackney have accused it of trying to price them out after it refurbished arches in Homerton’s Ponsford Street. One tenant said her rent would have increased from £7,500 a year to more than £20,000.

SAVE OUR SHOPS: what are Network Rail’s plans for the arches?