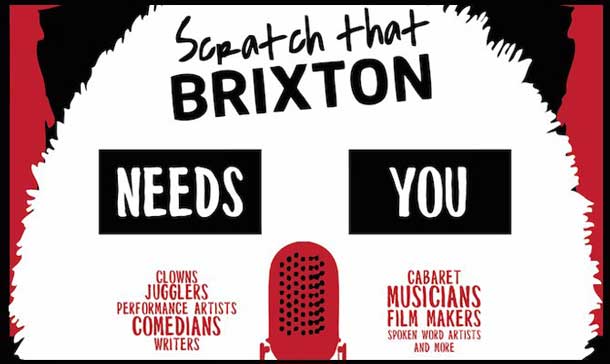 Upstairs at the Ritzy

Scratch That offers a platform to musicians, spoken word artists, playwrights, performers, filmmakers, comedians and more. The night consists of seven or eight acts trying out work in development to an open and friendly audience who can offer anonymous written feedback. 8pm. Free.

Rare London show from Leeds-based folk rock (with a touch of psych) stalwart Pete Greenwood, plus support from a couple of the capital’s finest agit-folk guys, Joe Wilkes and Damien Renouf. Hosted by Acoustik Fantasy Records who used to be called Folk Roots New Routes and ran a monthly gig in New Cross. Now they release records and promote select songwriter gigs in UK. 8pm. £3.

Formed on Brixton Hill, Hot Sauce Pony return “home” for their first show of the year after spending the first week of 2017 recording their debut album with Steve Albini in Chicago’s Electrical Audio studios. The band features current and/or former members of Rat The Magnificent and Stuffy/The Fuses. Hot Sauce Pony’s Fenced In now available now on a split 7″ green vinyl single with Gaygirl’s Dance To Death from Brixton Hillbilly Records. New band Creepy Neighbour provide electro-pop. Magic Brother could have held their own in the sixties – think Traffic or Jefferson Airplane – but play music very much for the future. Hurtling with Jen Macro from My Bloody Valentine, The Hood Rats etc plus the men of Smallgang will give it some. 8pm. £3.

Upstairs at The Ritzy 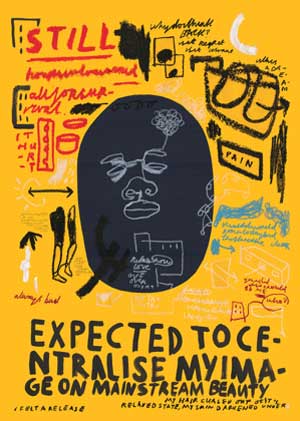 Ain’t I Beautiful? is a group exhibition designed to start a discussion and challenge what gives something “beauty”. 198 says people are faced with re-evaluating how they identify both individually and collectively. The exhibition highlights PoC (People of Colour) and queer artists intentionally bringing their voices to the forefront of this discussion. Ain’t I Beautiful? is brought to 198 Contemporary Arts and Learning through its Possible Futures program and is curated by Mattie Loyce as a part of her Mission Gallery project. Mission Gallery is a travelling gallery that focuses on PoC identified artists local to its exhibitions. Free. Until 3 February. Image Joy Meissi.

Friday 20 sees the start of a series of events in the greenhouses, which continue into Sunday 22, beginning with

Storytelling for under-fives: New Tales for a New Year – heralding the Year of the Rooster with the Chinese zodiac story as well as an animal race. 11am – noon. Free, but book.
Folk tales and theatre for under-fives: Saturday 21: There’s magic and mystery in every plant. Each tree has a tale to tell. Weave a garden story and create a Hapa Zome printed hand puppet. 10.30am to 12.30pm. £5.00 per child / £2.50 low-income. Book.
Make the kids’ natural play kitchen: Saturday 21: Use recycled materials to help make an outdoor play kitchen where kids can stir, pour, dig and play.  Mud cakes anyone? FREE Event, suitable for adults and kids seven-plus. 1.30pm to 4.00pm. Book.
The productive garden: Sunday 22 and Sunday 29: Learn how to grow food at home – year round and organically. Find out what to do and when to do it. No space too small. All learners welcome. 10am to 1pm. Free event for adults.  Book. 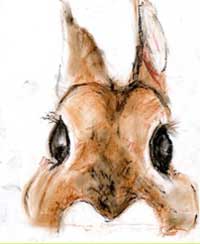 Rabbit Tales – children’s storytelling/arts and craft session with Angela Risner and Maria Zourari, graduates of the International School of Storytelling. Rabbit is so small and cute and looks so innocent, that everyone in the jungle thinks that he is easy to fool. But in these tales the little rabbit shows that he can outwit them all. A rabbit-mask making workshop with the children will follow the performance. Age 4-8. 11.00am-12:00pm. £5 per child – parents welcome to stay.
Off the Cuff, Arch 645, 301-303 Railton Road, SE24 0JN.

Psyrhythmix psychedelic trance with the debut of Essence plus Libra9; Maverick; Her Indoors; and Craig Fowler. 11pm – 7am. £5 before midnight, £10 after.

Another instalment of Lunchin’ with Brixton People’s Kitchen, this time hosted by Pop Brixton. BPK will serve a three-course, vegetarian meal made from surplus food donated by local retailers and cooked by volunteers – psy what you feel. PLUS BPK will celebrate patties, pasties and empandas – make your own patties and do some food science. PLUS the People’s Lawyer and Poet David Neita will perform. 1 – 3.30 pm.

The loss of Fabric’s licence at the end of last year saw Playaz taking an unplanned break. Now they return to London at Electric with one of their biggest lineups yet: DJ Hype; Hazard; S.P.Y; Randall; Break Danny Byrd; Sub Zero; Taxman; Annix; Potential Badboy; and Tyke. With MCs: GQ; IC3; Eksman; 2SHY; Carasel; and Texas. 10pm – 6am. £23.

For something completely different, bunk off whatever you do on Monday afternoons and head for the Ritzy to see the Royal Shakespeare Company perform Shakespeare’s Tempest. In a unique partnership with Intel, the production will be using the most advanced technology in a bold reimagining of Shakespeare’s magical play.2pm. Follow that up by popping upstairs at 8pm for Flamenco Express. £12/£8 concs.

Streatham Free Film Festival volunteers are screening Ken Loach’s masterpiece I, Daniel Blake in association with Streatham Food Bank. It’s free, but donations – cash or supplies – for the foodbank would be welcomed. Anne-Marie McGregor, Co-ordinator of Streatham Free Film said: “The key aim of the Streatham Free Film project is to bring people together from the local area to enjoy films whilst celebrating the local community and giving something back. When I, Daniel Blake came out it really resonated with us that the struggles faced by those in the film are the reality for many people across South London. We wanted to give local residents the opportunity to see the film as well as the opportunity to support local food banks in the vital work that they do. We hope to see as many people at St. Margaret’s as possible on the night and welcome all donations however small.” 7.45pm.

A delightful first Brixton Bookjam of 2015