Ritzy Workers staged their fifth walk out yesterday in their continuing campaign for the London Living Wage. The strikers who rallied in Windrush Square on Halloween based their protest on the 1968 film ‘Night of the Living Dead’. Campaigners said the zombie theme fits with their slogan Living Staff Living Wage. 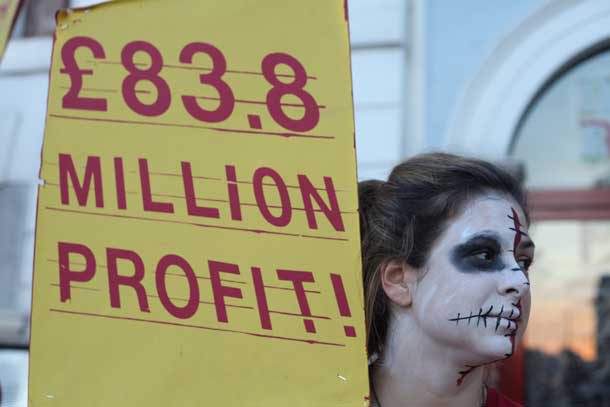 The “Living Wage” rate increased by 35p on Monday (yesterday) to £9.75 at the start of “Living Wage Week”. The rate is set by the GLA and the Living Wage Foundation and is calculated according to the basic cost of living in the UK. The Ritzy workers are supported by their trade union Bectu . 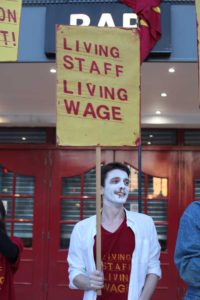 Kelly Rogers, from the Ritzy cinema, said “We went on strike two years ago over pay, and we’re out again because we’re still being paid poverty wages. Many of us pay up to 75% of our income on rent. No one should have to choose between making rent or having time off when sick. No one should have to live on less than £140 a week when on maternity leave. We all deserve better.”

Kiv Legate, from the Ritzy cinema, said “Ours and BECTU’s multiple attempts at negotiating with management at Picturehouse and Cineworld have been completely rejected, despite an agreement two years ago to meet and negotiate towards the London Living Wage in June 2016. They also refused a mediated meeting with ACAS. The company has left us with no choice but to take strike action; they need to start valuing their workers and commit to a more ethical pay scheme.” 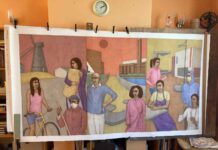 The Ritzy Strike’s Back