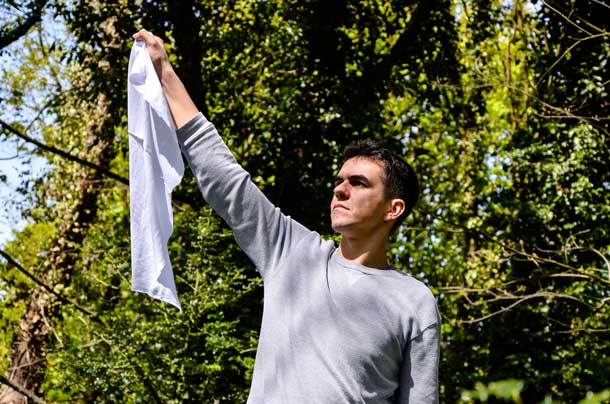 Former Brixton resident Xavier de Sousa’s solo performance POST comes to Ovalhouse Theatre from tomorrow Wednesday (30 Nov – 3 Dec). The show focuses on what it means to be a migrant and asks what national identity is nowadays.

The show uses British and Portuguese history, cultural traditions and personal experience to explore the dichotomy of a generation who grew up in an open-doors Europe, accustomed to technological advances, travel, exchange and international engagement and the fear and nationalism sweeping across the world which threatens to close borders.

Xavier de Sousa said: “POST came as a direct response to the rhetoric employed around migration and refugees in the UK and across mainland Europe. It was essentially my way of re-gaining some sense and some pride in the word and the lived experience that being a migrant provides you with.

“Over the past two years or so, since the rise of UKIP into the national mainstream we – those of us who had the misfortune of being born outside of England (and I emphasise England here, rather than the UK), have been treated as bait for an apparent national hunger to demonise a group of people as the ones to blame for the economic and governmental failures in this country.

“POST is about post-nationalism and looks back through history and at specific traditions and identities that form part of both Portugal and England’s ‘brand’, in deconstructing this it asks ‘why are we so obsessed with keeping this so-called national identity and what the hell is that in the first place?”

You can find out more about Xavier de Sousa here.

Audiences are invited to respond to the show in whatever way feels natural; moving around, making noises and coming and going from the auditorium if needed. Latecomers are permitted. More information on the Extra-Live movement here,