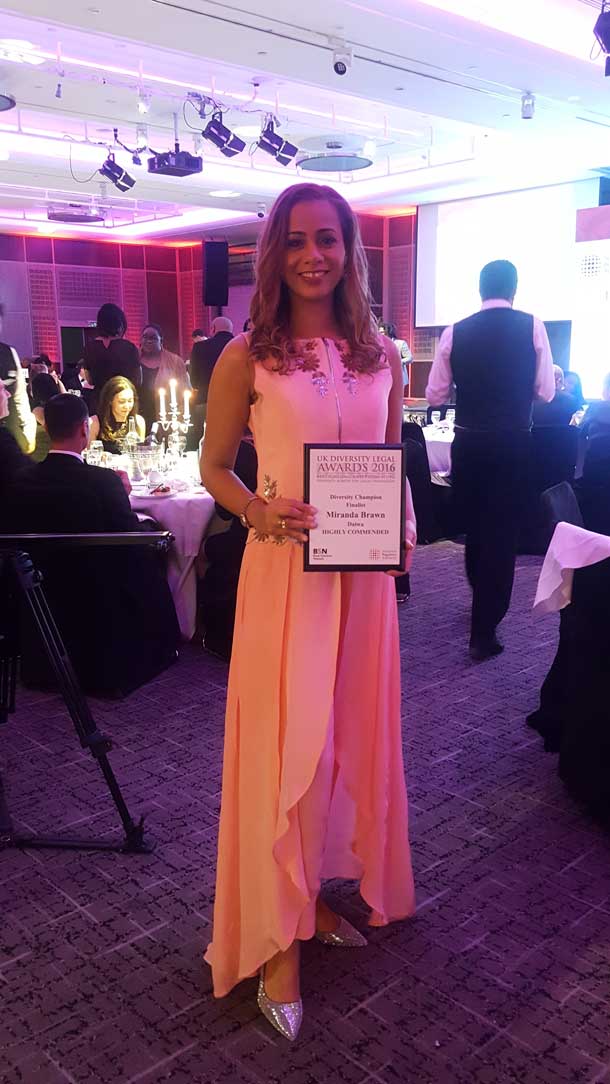 Miranda Brawn, vice chair of the Black Cultural Archives and a Lambeth equality commissioner has been highly commended for her work in seeking to improve race and gender diversity in the workplace.

Brawn a barrister and businesswoman was “highly commended” at the prestigious UK Diversity Legal Awards 2016. She was recognised for her extensive diversity work during the past 15 years especially within the legal sector. The award also recognised the fact she has launched the UK’s first diversity lecture aimed at school children.

The winners were announced at a black-tie dinner on 22 November. Reeta Chakrabarti, BBC television presenter and journalist presented the awards.

Receiving the award, Miranda Brawn said: “I am delighted and humbled to be recognised for my diversity work. This recognition will help to raise the profile of the work which the Miranda Brawn Diversity Leadership Foundation is aiming to achieve by increasing diversity across all sectors not just law aimed at the next generation of leaders. We need to keep diversity at the forefront of everyone’s minds especially in current times.”

The UK Diversity Legal Awards are the only industry awards which focus solely on recognising and promoting equality, diversity and inclusion, across the legal profession. The awards aim to raise the profile of the work being done and also demonstrate an industry commitment to improving diversity.

Sadiq Khan, Mayor of London welcomed the awards as a way to raise standards across the legal field and said he hoped “that these developments will dovetail neatly with our efforts…to promote active citizenship across the capital and improve social integration”.