A pop-up music festival in support of the Half Moon Pub saw local musicians take to the streets of Herne Hill. Campaigner Peter Blair reports on how it went.

On a cold and damp Saturday afternoon at the Herne Hill Hill end of Railton Road, the local community gathered in Station Square to watch a pop-up festival of local performers supporting the campaign to save the famous live music venue at the Half Moon Pub.

Jo Brand kicked-off the day in some style, warming up the crowd with her trademark wit, including chastising a local heckling dog (apparently owned by Josef Pitura-Riley’s bass guitarist). “I’ve lived in the area since 1978,” she said, “live music and comedy are an essential part of our community. Herne Hill is vibrant and needs this venue. Once gone, it is lost forever.” Jo also stayed afterwards in the cold watching the acts. An absolute star!

Josef Pitura-Riley proceeded to play an engaging opening set of original numbers with his band, despite being hampered by ‘frozen fingers’ – an habitual concern of the outdoor pop-up winter music festival scene. He’s now off on his first UK tour – presumably playing indoors.

Identity Crisis are reason enough alone for saving the music venue at the Half Moon. A young band, still at school, who need a local venue to play whilst they perfect their stage craft. Watch out for these young men, they are seriously good. Reminiscent of a young Mogwai. For many, their version of ‘Stairway To Heaven’ was the highlight of the day. 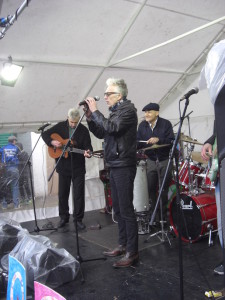 Scrofulous Beast played a beautiful set and almost made you believe you were actually sitting listening to them in a warm pub with a pint. They also had the distinction of having played at the Half Moon before it was closed by the Herne Hill flood in August 2013. Which reminds us, thank you for nothing Thames Water!

Mid-afternoon saw a perfectly judged acoustic set from Guy Davies, in front of a steadily swelling crowd. By the time O’Connell & Love arrived on stage, Station Square was packed out with hundreds of people. Founder member of Alabama 3, Larry Love (Rob Spragg), provided the afternoon’s defining rock and roll moment, arriving hot foot from Clapham, lighting a cigarette, grabbing a beer, and heading straight to centre stage. O’Connell and Love were, in a word, brilliant. With support like this, it is possible to believe that the Half Moon will rise as a live music venue again.

Rolo McGinty from The Woodentops was next on stage, performing an amazing version of Love Train and rolling back the years for many members of the audience. Rolo performed with ex Woodentops drummer Simon Goodchild and Sarah Garrod on bass guitar, as the setting sun over the neon Best Kebab sign and Station Square’s boarded up shops (recently closed for ‘refurbishment’ by Network Rail) began to look almost romantic.

The festival day was closed with a set from DJ Food, who informed us that he was probably the last act to have played the Half Moon in 2013, as he was there to play a gig the night before it flooded. DJ Food has perfected a knack of spinning familiar tunes, from sources as diverse as Hot Chocolate and Paul McCartney, to create an impossibly happy dance vibe. His blinding set still had a large crowd of people raving in Station Square before the shop owner supplying the festival power finally asked to go home!

Music for masses. The community has spoken. Save the Half Moon. Are you listening Dulwich Estate and Fuller’s Brewery?

Check out more photos of the event on Tricia Keracher-Summerfield’s website.

Festival to save The Half Moon pub