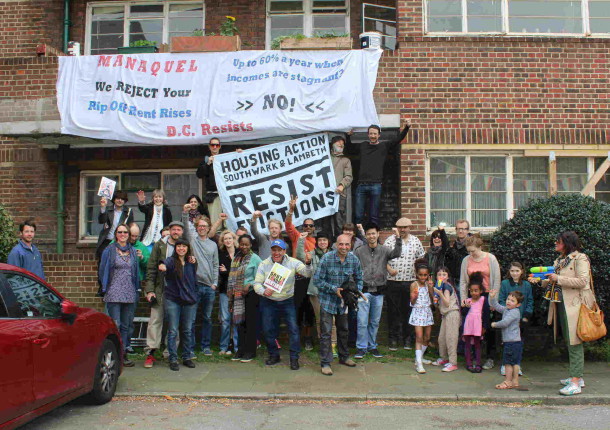 Angry residents of a Herne Hill estate hit by “rip off” annual rent hikes recently staged a protest outside their homes.

Tenants of the Dorchester Court Estate on Herne Hill Road have been forced to either accept huge rent increases or move out.

On May 2 residents gathered in the middle of the estate. Protesters made speeches and erected banners declaring “We reject your rip off rent rises”.

Their frustration is directed at Freehold owners, Manaquel Company Limited, who residents say have allowed the buildings to fall into a state of disrepair.

Dorchester Court was built in 1932 and is Grade II listed, but many parts have been neglected, with windows and balconies propped up by wooden supports, and paint peeling off the walls of corridors and inside flats.

Many are angry that despite being long-term residents they have no legal protection against aggressive rent rises and eviction.

Under the terms of one-year Assured Shorthold Tenancy agreements (ASTs), the landlord has the right to demand vacant possession of the property, without explanation, within two months, under a Section 21b notice.

Ravi Bali, a member of the Dorchester Court Resists Group, said: “Anyone who questions the rises finds that the following year their contract is not up for renewal, and they are told to move out.”

Tenant Tracey O’Dea, who moved into the flat she rents with her partner 18 years ago, negotiated repairs to her residence when her rent was increased from £800 to £1000 per month in 2013. 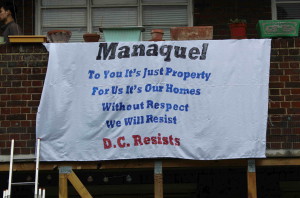 However, a year later the agreed repairs had still not been made, and instead she was sent notice telling her to vacate the property by April 2015.

O’Dea said: “It’s a horrible realization how little protection you have.

“This place feels so special to us which is why we want to stay, but active community members are being picked off one by one.

“The landlords don’t want people with a vested community interest. They don’t want these fights on their hands.”

Another resident, Ryan Reid, who has been living on the estate for eight years and whose rent has increased from £1100 to £1625 per month since 2013, said: “The power is so much in the hands of the landlords…They are putting up rents at least five times the rate of inflation at the expense of the community, people and their homes.”

Speaking at the protest, he said: “The landlord has been neglecting this estate for years and tenants and leaseholders here are paying the price.

“I want to see the council support residents to take on the landlord and I’ll be working to make sure this happens in the coming months.”

No one from Manaquel Company Ltd. or the managing agent have responded to our request for comment.

The Flower Lady says plans to move her have been halted