Jedidajah Otte reports on a demonstration with a difference 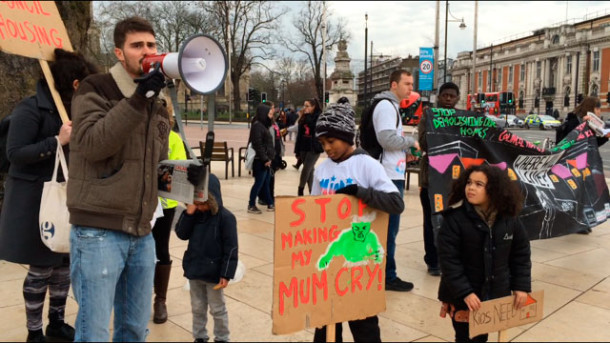 Children and young adults marched for affordable housing in Brixton on Sunday 6 March to protest against the “social cleansing” of communities in London.

Demonstrators from all over south London gathered in the freezing cold at Windrush Square to protest against the government’s Housing Bill, which many experts have described as “the end of the road” for affordable and social housing.

“Housing is for everyone, especially the kids” and “Whose homes? Our homes!” were some of the slogans protesters chanted as they marched from Windrush Square to Cressingham Gardens estate where activists and members of the Save Cressingham Gadens campaign spokes to a rally.

Laurie Underwood, 29, from Croydon, joined the march with his three young children.

“It’s becoming impossible for working people, families, to get decent accommodation,” he said. “It’s not something that we can opt out of, everyone needs somewhere to live”.

“I myself, my wife, we are working as many hours as we possibly can, but our rent is taking all our income”.

Among the protesters were activists Jasmin Stone and Janice Graham of Focus E15, a campaign launched in September 2013 when 29 young mothers in Newham were served eviction notices after Newham Council had cut the funding for the Focus E15 hostel for young homeless people.

“We’ve come here mainly because we know what’s going on with the gentrification and people being evicted. Focus E15 started off with 29 young mums being evicted from a hostel. They all got together, two and a half years a go, and put up a fight to stop being sent out of London,” Janice Graham said.

Residents of Cressingham Gardens in Brixton joined the demonstration as they still face losing their homes, despite their victory  in November when the high court found Lambeth Council had acted unlawfully during the public consultation process over plans to redevelop the estate.

Elizabeth, a teenager living at Cressingham Gardens, marched with her  family and two friends. “People are moved miles away, they might lose their jobs, it really worries me, especially because I live somewhere where they might actually demolish my home”, Elizabeth said.

The organiser of the march, Our Brixton, a “multi-arts campaign that aims to discuss and respond to Brixton’s fast changing identity”, described the support of all participants as “truly an inspiration” and asked people to join the national march against the Housing Bill on Sunday 13 March. 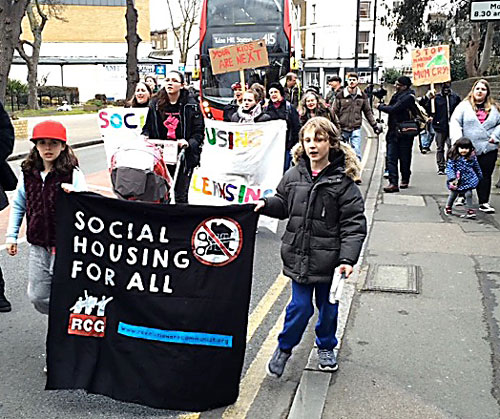 No let-up for Lambeth as housing crisis grows