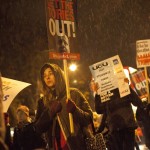 The group, joined by others protesting against the council’s sale of short-life housing and its plans for the redevelopment of the Cressingham Gardens estate, marched into the town hall’s main chamber for a council meeting.

The protesters chanted “Whose college? Our college” and “Lambeth councillors, no sell out” noisily from the public gallery, twice forcing councillors to suspend the meeting.

Labour’s councillors did not let them present their petition or make a deputation, instead telling them to come back to do so at the next meeting.

However, the Liberal Democrat councillor Alex Davies presented a petition from 1,200 residents “dismayed” about the proposed sell off and demanding that the council opposed it.

Speaking outside the town hall last night, protester Bill Perry, a member of Unite Community, told Brixton Blog: “The link between everything here is that we are protesting against people who know the price of everything but the value of nothing. Everybody understands the price of land and property but they don’t understand the value of homes and education.” 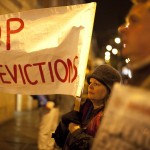 During the meeting, councillors were urged to bring in a policy of refusing to evict tenants who struggled to pay the rent because of the government’s “bedroom tax”.

In response, councillor Pete Robbins said no Lambeth tenant had been evicted because of the charge.

Cllr Robbins also introduced a report on the Lambeth Local Plan, which sets out the council’s approach to housing, employment and town centres in the borough.

Also at the meeting, Labour councillor Paul McGlone presented a report on the council’s financial situation. He said the council faced a 16% cut in its government funding in 2015-16. In the six years to 2017, he added, the council’s core funding would have been reduced by 50%.

See more of photographer Jeannine Mansell’s emotive selection of pictures of the march.