Lambeth Council leader Lib Peck has said she is convinced the council is “doing is the right thing” for Cressingham Gardens and “the right thing for Lambeth.”

In a blog post about Monday’s cabinet meeting which approved plans for the regeneration, Cllr Peck said: “We are talking about people’s homes, so it’s completely understandable that the community feels threatened. There is a strong sense of community on the estate. But this is something we want to strengthen, not destroy, by replacing homes that in some cases are in a very poor condition. We are also guaranteeing everyone a place back on the estate.”

She added that London is in the grip of a housing crisis :”The Tory-led Government has presided over the lowest level of housebuilding since the 1920s and cut the budget for affordable homes by 60%. There are 21,000 people on the waiting list in Lambeth and 2,000 families are in temporary accommodation.”

She said the Estate Regeneration programme, of which Cressingham is part, presents “a golden opportunity to act in the face of the crisis…This development will increase the number of social housing units on Cressingham Gardens.”

However, residents of Cressingham Gardens have urged Lambeth council to halt the demolition of the estate and explore new proposals for refurbishment. 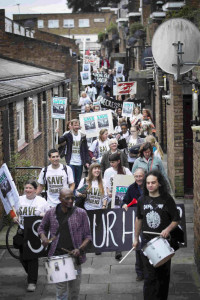 They say Lambeth’s plans will “destroy the existing, vibrant community” and have offered alternatives that they say will be cheaper.Gerlinde Gniewosz, Cressingham resident and co-chair of the Tenants and Residents Association, said: ‘The council is misleading Lambeth residents when it states the regeneration is motivated by the need to build 1,000 extra council homes.“This is just political, a veneer to cover up financial mismanagement in its decent homes major works program – Lambeth has demonstrated it has no interest in truly helping residents. The officers and councillors have ignored what residents are repeatedly saying about the really negative effects of what they are proposing.”Lambeth’s Green Cllr Scott Ainslie said: “In 2012, council leader Lib Peck promised to do nothing to Cressingham Gardens that wasn’t supported by the residents. No wonder residents feel completely betrayed.“Alternative proposals by Cressingham residents which would do exactly what the council says it wants to achieve – but without the destruction of their community – have been put forward. By ignoring them, the council is doing completely the wrong thing. Everyone can see that, it seems, except the Labour Party in Lambeth.”

Could you be a foster carer hero?