Lambeth council has announced that it is to press ahead with the demolition of its Cressingham Gardens estate.

In a news release issued at 17.41 on Friday evening, it said that after “an extended and intensive process of consultation with residents”, council officers had recommended that all of the current 306 homes on the estate be demolished and replaced with “a minimum” of 464 new ones.

This plan was one of five options put forward during a consultation process which was halted last November when a judge ruled that the council had acted unlawfully in the way it had conducted the consultation. 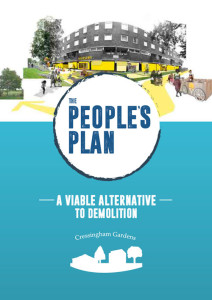 Residents have put forward an alternative drawn up by an architect who once lived on the estate.

The council said that all existing council tenants would get a new home, at council rent levels, with a lifetime tenancy,  meaning there would be no loss of social housing as a result of its decision.

The recommendation and responses received from residents during the consultation will be considered by a Lambeth council cabinet meeting on 21 March. The cabinet members will make the final decision on the future of the estate.

The council said that it had considered five plans, but that only the option of “full rebuilding” could both deliver better homes for existing residents and also increase the number of homes, particularly genuinely affordable rented homes, in the depths of a severe housing crisis. This option would not be “constrained by the financial circumstances of the council’s housing revenue account”.

The Cressingham residents’ own “People’s Plan”, will be considered by the cabinet when it makes its decision. But the council said that it “could not be considered a practical option”.

It said that, based on the information received to date, it was unable to recommend the plan because:

“As a result this does not make best use of the funding available in the Housing Revenue Account and therefore it does not represent value for money,” the council said.

Lambeth council documents on its plans are available here.

The council says that the borough faces a major housing crisis, with 21,000 people on the waiting list; over 1,800 families in temporary accommodation, overwhelmingly families with children; and 1.300 families are severely overcrowded. “To address this challenge the council administration was re-elected in 2014 on a pledge to build 1,000 additional council rent homes by 2018-19”.

Lambeth honours librarian whose job is due to disappear