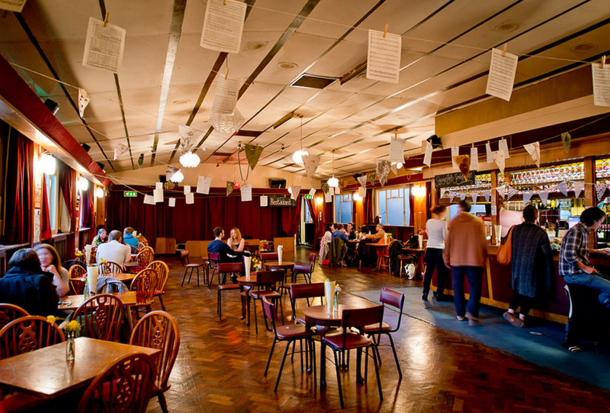 In this month’s Called to the Bar series Julie Carolan meets Kyle Miller, assistant manager at the Effra Social.

Tell us about the Effra Social

The site is almost 100 years old – before it was the Effra Social, it was Brixton’s local Conservative Club. The place is steeped in history – our front room is called the Churchill Lounge because, you guessed it, Churchill could sometimes be found having a drink in the bar. John Major and Iain Duncan Smith were known to frequent the club as well. The place closed a few years ago and the owners of the Effra Social took it on in 2013. They didn’t want to change very much, so the look and feel of the place is very much alive today.

What are your signature drinks?

We’re one of only two or three places that have some of Brixton Brewery’s brews on draught which we’re all really pleased about – they make fantastic beers. I think we’re mostly known for our wide beer selection; as well as local beers, we stock some of the classic lagers and ales, along with craft brews from around the country.

What are your favourite beers at the moment?

That’s such a difficult question. Siren Brewery from Berkshire make excellent beers – my favourite is Soundwave which is a west coast IPA at 5.6% ABV. It’s a beautiful beer.

With lots of gin. I’m not bothered about the garnish – either a lime or cucumber – and a dash of tonic water.

Where do you stand on The Great Debate – gin or vodka martini?

What’s the strangest thing a customer has asked for?

When customers ask for a drink, I like to ask ‘are you in here?’ to see which way they’ll answer – about one in four tend to get what I mean. It’s my own personal joke and it keeps me amused.

Any top tips for trends this summer?

We focus on traditional British cuisine at the Effra Social which continues to be popular. This summer, I hope we’ll see more of an appreciation for offal – they’re better cuts of meat compared to your rumps and sirloins.

Where do you like to eat and drink in Brixton?

I like The Craft Beer Co on Brixton Station Road. They have a great selection of beers on tap. I go to gigs at The Electric and Brixton Academy every couple of weeks. If I go to Brixton or the Village, I’d just go to a café, as I prefer cooking at home to eating out. My signature dish is pilaf – spicy rice in the oven.

Which brew would you recommend beer novices try?

Either Meantime’s London Lager or London Pale Ale – both are nice and light. Or Siren’s IPA (the 2.8% ABV I mentioned earlier) – it’s light and not too hoppy.