Along with establishing itself as a destination for food, Brixton over the last couple of years has become one of London’s most interesting areas for wine. The openings of Market Row Wines, the Wine Parlour, Champagne + Fromage, and Brindisa have created a patchwork of places to buy and drink wines that aren’t sold on the high street, but which are excellent value for money as a balance to their relative obscurity. Not merely satisfied by plying ubiquitous New Zealand Sauvignon Blanc and Blossom Hill rosé, these places are challenging us with wine oddities and encouraging us to discover something new.

Taking a similar approach, the latest addition to Brixton’s unconventional wine scene is Naughty Piglets, a bijoux restaurant tucked across from the Hootananny on Brixton Water Lane. Opened by Margaux Aubry and Joe Sharratt in March, it has already attracted attention in the press from Fay Maschler, Jay Rayner, and Amol Rajan from The Independent for its charming character and Joe’s flavoursome dishes.

However, Naughty Piglets is just as much about their wine, a selection curated carefully by Margaux. Wine lists often reflect the personality of their creators, and Margaux’s exuberance and eclectic taste shines across hers. When asked how she puts it together, Margaux explains, “When we’re tasting with wine producers and suppliers, I’m looking for something that stands out and I just pick it! It’s a matter of impression and what you fall in love with straight away. I put it in without thinking too much. If it works it works, and if it doesn’t we take it off the list.”

And her list is a collection of her intriguing finds and filled with lesser-seen grape varieties and regions. Gros Manseng, Chasselas, and wine from Jura are served by-the-glass and she has Barbacarlo from Lino Maga, a red wine blend of local grapes from Lombardy anchoring her premium bottles (I had to Google it). The relative obscurity of her wines has the potential to intimidate even the most battle-hardened wine drinking customers. However, Margaux’s view is that the list serves as a jumping-off point for a conversation, and she prefers talking to people about what they generally like and expanding upon that. “People love getting recommendations and tend to know more than what we expected, people do come here for the wine list.”

Also, the wine lists consists of what are generally known as “natural wines”, a term which comes with connotations of hippy wine-making practices and off-kilter flavour profiles due to the lack of filtration, additives, and preservative agents often used to stabilise conventionally-made wine. Margaux emphasises that while her lists incorporate mostly natural wines, she prefers not to use this catch-all term. In describing her approach, she emphasises, “[With these wines] some can be very clear and straightforward while some are cloudy. It’s just about choosing wine producers that I met and that I love that use “low intervention” methods.”

During a long, boozy dinner with a wine-industry friend, we discovered a range of styles which share a sense of rawness that are a highlight of this wine-making approach. These wines carry the flavours of the original grapes at their most elemental. A Jurançon had a racing acidity and the taste of freshly squeezed, pulpy lemonade. The VdF L’originel Simon Busser Côt (the local term for Malbec in its birthplace of Cahors, France) had an intense red cherry aroma with underlying notes of spice. A leap of faith is the orange wine on her list. More like a scrumpy cider in taste than a traditional wine, it’s actually very food friendly, having a tang and slight savouriness that cut through rich dishes like the pork belly with Korean spices. The highlight for us was the sweet, white Verduzzo from Italy, which far from being cloying like many dessert wines, balanced a musky grape flavour with a restrained sweetness and refreshing acidity.

While covering Spain, Italy, France, and Austria now, the list changes every week and there may be some New Zealand and South African wines that might make the cut soon. Although the list has all price ranges, including some heavy-hitting bottles topping £95, most of the wines offer a level of affordability to make experimentation palatable. As Margaux put its best, “It’s all about sharing what I love with people”.

Regine Lee is a wine writer and educator living in Brixton. Follow her on Twitter at @RegineMLee or check out her blog spilt-wine.blogspot.co.uk

For opening times and more info visit their website. 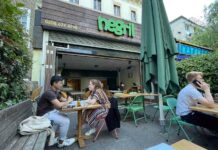 Called to the Bar: Effra Social

Trump that – Brixton has got its own Nuclear Dawn beer