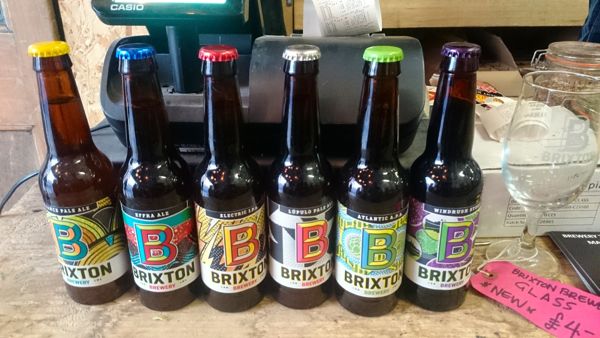 Now that craft beer is included in the nation’s inflation basket, we thought the moment ripe to see how things were going at the Brixton Brewery.

Back when we first met Jez and Mike in 2013, they’d just taken a leap of faith, opening up their dream brewery in one of the railway arches on Brixton Station Road.

The brewery now offers six delicious craft beers to quaff and to celebrate they’ve installed another tank which increases their capacity by a further 40%- a sign not just of how far they’ve come, but of their ambition for the future.

Orders are coming thick and fast from all around London and even beyond the M25, yet Brixton remains the brewery’s anchor and muse.  Localism clearly inspires everything about the ales on offer; from their names (Windrush Stout, Electric IPA, Effra Ale) to their labels designed by Brixtonite graphic designer Emma Scott-Child.

Microbreweries have always been a statement against globalisation and it is good to see that Brixton Brewery similarly puts the local community at the very heart of its ethos.  Jez talks passionately about how you can find any ingredient in Brixton, you just have to be prepared to look for it.  And indeed among the hops in the ales on tap, you’ll find specials featuring mango and sorrel bought from their neighbouring arch.

There’s a real solidarity too with the neighbouring businesses that occupy adjacent archways.  The ‘Cash and Carry’ next door is often the first stop for sourcing local produce to go into special beers and the garage two archways down has even helped with tools and fixing equipment.  All this comradeship strikes a chord given the outcry over plans for businesses in the railway arches at the other end of the road.

I’d arrived for the interview on a Saturday morning just before they were due to open the tap room for thirsty punters.  I should confess that I’d had a few libations the night before but I was (rather easily) persuaded to have half a pint of Electric IPA, one of their most popular ales.  It’s a fruity beauty made with hints of citrus which certainly hit the spot and would be a good starting point for people unfamiliar with craft beer.

They are hoping to produce more draught beer in the future to get their products into more local pubs.  For them, drinking a bottled beer on your own or with mates is cool, but drinking in a bar or pub elevates it “from a product to an experience”.

With that in mind the brewery is set to launch a Coldharbour Lager (what else?) just in time for some summer slurping.  And they’re also planning to experiment with canning beers to make it easier to export, putting Brixton on the map for beer lovers beyond the UK.

Whilst supping away with pen in hand, we were interrupted several times by keen customers looking to sample some ales.  They had all heard of the brewery through word of mouth recommendations and even discovered mutual friends, brought together through craft beer.

The Electric IPA was delicious in its own right, but the fact that it is so inspired by local flavours and with locals in mind made it taste that extra bit sweeter.

Brixton Brewery beers are available off licence from House Of Bottles on Coldharbour Lane and Market Row Wines as well sold in most bars and restaurants in the area. You can visit them to buy direct from the Brewery at Arch 547 Brixton Station Road or order online here.