Our film writer Adam Marshall shares his top picks for the Human Rights Watch Film Festival screenings coming up at the Ritzy this weekend and next week. 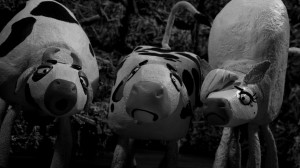 There are so many reasons to love cinema: Ron Burgundy’s jazz flute; T-Rex in pursuit of Jeff Goldblum; Ellen Ripley vanquishing aliens; Daniel Day-Lewis barking on about a milkshake; Tom Hanks generally.

Whats more – and in spite of the Transformers franchise – it can also be a platform for good. Nothing emphasises this more than the annual Human Rights Watch Film Festival. Its 19th programme includes the usual thought-provoking mix of documentaries and feature films, and runs at the Ritzy between the 20th and 27th March. Here are five highlights to look out for:

Question: who among us doesn’t like a good sing and dance. Answer: the Iranian government who, after 1979’s Islamic revolution, made it illegal for women to sing publicly in front of men. The documentary tracks Sara Najafi as she takes remarkable personal gambles to shatter taboos and unshackle Iran’s formidable cultural heritage of song. Prurient comparisons to Flashdance be vanquished – No Land’s Song has already picked up the Best Documentary Film award at last year’s Montreal World Film Festival. The party continues immediately following the screening too, as the Light of Music Ensemble: Celebrating Female Iranian Singers perform for free upstairs at the Ritzy.

When Claudia Paz y Paz became the first female Attorney General of Guatemala, she vowed to take on the untouchable proliferation of organised crime and sought justice for some of the worst abuses of human rights in the history of one of Earth’s most violent countries. This documentary chronicles her struggle to secure the conviction of former dictator Efraín Rios Montt on charges of genocide, against seemingly impossible odds – not to mention death threats.

It may be the quintessential classroom debate, but the whys and wherefores of Catholic countries’ abortion laws continue to mar the lives of millions of the world’s women. Through the prism of a Nicaraguan obstetrics doctor, the documentary considers the absurd risks taken by doctors everywhere as they seek to reconcile oppressive and harmful abortion rules with, somehow, at the same time safeguarding the health of their patients.

Wondering how you managed to miss the first seventeen films in the The Wanted series? Fear not – the titular 18 refers to a kine of Palestinian cows, who become local celebrities when borderland farmers start a thriving dairy collective. Until, that is, the Israeli army consider the operation a national security threat and tries to shut it down. This so-ridiculous-it-must-be-true documentary mixes talking heads with stop motion animation to recount the tall tale of the bovine fugitives.

Bringing the curtain down on this year’s festival is a bonafide headliner. Jon Stewart, who shocked liberal comedy lovers last month by announcing he will this year ditch his Daily Show hosting duties, makes his directing debut by adapting Iran-based journalist Maziar Bahari’s memoir of his months incarcerated in a Tehran prison. And Stewart brings star power to the captive’s personal story, with Gael Garcia Bernal (The Motorcycle Diaries) playing Bahari and Kim Bodnia (The Bridge) as his interrogator-in-chief, the eponymous Rosewater.

Film: They Go To Die – tonight at Ritzy