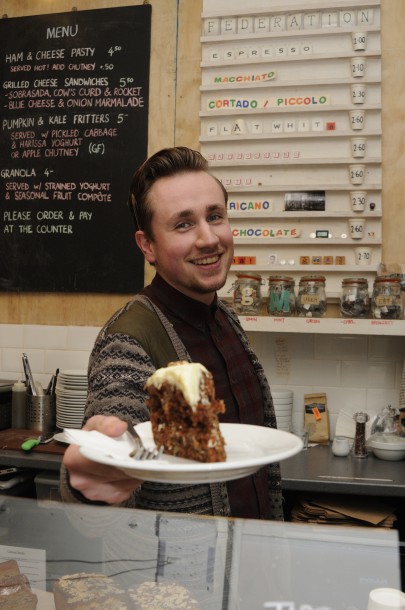 The two businesses have been collaborating for some time with Salon providing Federation’s bespoke baked goods, so when Federation founders Nick and George decided it was time to sell up so they could pursue new projects, it made sense for Salon to step in and keep the business in Brixton hands.

Nicholas Balfe, proprietor and head chef at Salon, said: ” It’s a huge honour to be involved with Federation. We’ve been regulars at the cafe since it opened. Alongside the likes of Franco Manca, Rosie’s, Cornercopia and Etta’s, Federation was one of the originators who helped kick start the regeneration of Brixton Market. Without them at the forefront, it’s possible none of us would be here today.”

Salon began trading at Federation on November 1 2014. The Federation brand will remain intact with the same staff and approach to coffee, both at Brixton Village and at the hatch at the Piano House.

However, the new owners have plans to develop further with Salon x Federation pop ups in the evening featuring food and coffee-inspired drinks. They will also be expanding the daytime menu and starting a new ‘brew bar’ to showcase new and less well-known coffees for the caffeine buffs.

Nicholas ​said:”We inhabit such a close-knit community of small businesses in Brixton, it’s incredibly exciting to be part of the success that brings.”

The Joint Goes to Marylebone