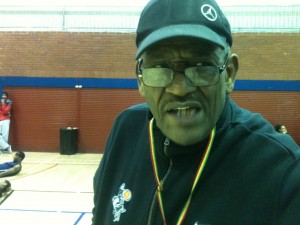 Jimmy Rogers founded the Brixton basketball team, the Topcats, in 1981. Since then, it has produced basketball professionals the like of Chicago Bulls All Star Luol Deng, but more importantly Jimmy has provided support and encouragment to scores of Brixton kids. Jimmy has seen a lot change in the area since 1981 and he tells us about it here

“It’s been 30 years since doing Topcats. Has the community changed? Well, it has and it hasn’t. There’s some very good things, there’s some not so good things. You go in the market now on a Friday or Saturday, but it’s not the Brixton community we know is it? It’s the new age.

I think some good things have happened. A lot of the Brixton community has been forced to recognise and, not get together, but kind of communicate together. I think that’s happened. All sections. I see that at the Lambeth Show every year.  Definitely, I do. Circumstances have forced them to do that really. On the one hand you’ve got the negativity of the violence, the drugs and the shootings, God forbid. On the other hand, you’ve got …well…has the environment got better? Physically, there’s been some gentrification – a lot of it I don’t like, but some of it’s alright. I like outside by the library for example. I like that kind of thing. I think some people can always criticise it but I quite like it, I think that’s great.”