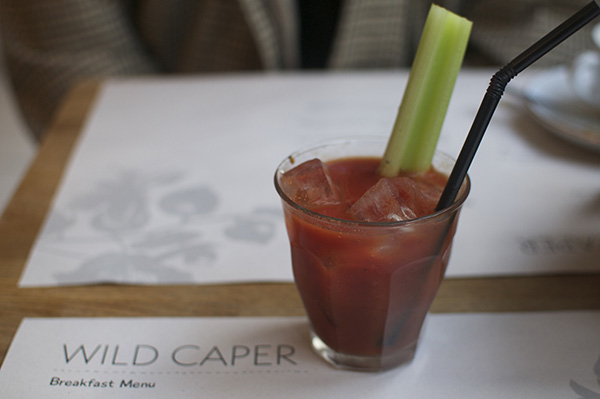 This is a bold statement for a foodie like myself, but I’m going to be brave and say it. SOMETIMES a Bloody Mary can be the best thing about a brunch. Sadly, that’s not true at Wild Caper.

Too much citrus, and too little of all those other little lovelies – celery salt, horseradish cream and pickle juice. If you’re going to pride yourself on serving brunch, you’ve just gotta get the basics right.

Fortunately, the rest of the offerings were much better.

Wild Caper is an eastern Mediterranean eatery in Market Row. They pride themselves on good produce – and so they should. Their sourdough bread is divine and is sourced from a local baker. Their bacon and sausages are rare breed Gloucestershire Old Spot, so they’re full of meaty flavour and leave you satisfied. And that’s topped off with some deliciously golden centred Clarence Court eggs.

Oh, and if you’re still on your New Year’s Resolution diet, there’s something there for you too.

Their brunch menu is simple but effective and prices are middle of the road. There’s enough space for around 25 people at once.

I plumped for the grilled bacon, poached egg and hollandaise on sourdough, whilst the other half had a man-sized full wild breakfast. 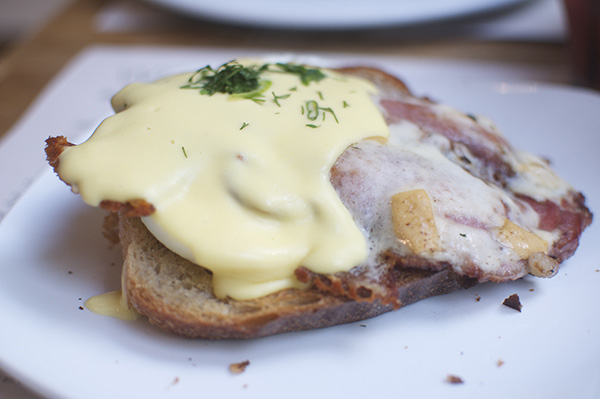 There was a home-smoked mozzarella mentioned on the menu which I asked the chef to add – it came melted on top – result! My plate was very handsome and made me want to dive right in, which after having taken a few snaps, I did. I wasn’t disappointed – the hollandaise was creamy and well flavoured, the bacon was grilled to perfection and the toast was nice and crunchy with a great sourdough flavour. The only slight disappointment was the eggs – slightly overdone and poached using one of those machines which makes them look like perfectly formed miniature UFOs.

Over on the other side of the table, Luke’s wild breakfast wasn’t quite as man-sized as he was hoping, however everything was perfectly lovely and he was kind enough to let me bite the end of his sausage (ooh matron!), which was hands down the best thing on the table. 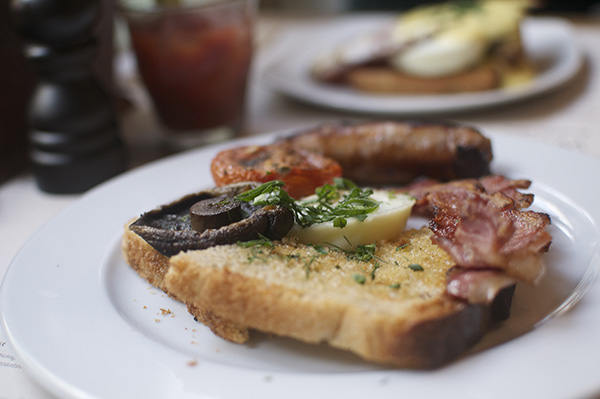 A delicious creamy decaf cappuccino finished us off nicely and we went on our way into a cold Brixton morning. We’d definitely recommend Wild Caper to those wanting a relaxed brunch which you’re not going to pay through the nose for, but where you can still expect good quality food. I’d also be interested to head back there for their later-in-the-day food and wine list. And for more of that sourdough.

Nikki is at Instagram as n_griffiths for more Brixton shots. 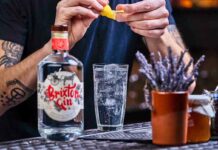 0
Market Row Rum is a new distillery based in the heart of Brixton. Set up in offices...

5
Dim sum is one those perfect ways of eating. Less committal than normal two- or three-course dining, it is an opportunity to try a...

0
Brixton is home to cuisines from all over the world and Rastafarian Ital food is one of them. Sister Marcia Cunningham...

0
The heat is on. British summertime and this colourful Tuscan 'peasant' salad scoops up fridgey leftovers, zing-fresh veg and even stale bread. Once again,...

0
As well as running a slapdash, unofficial cooking school for my locked-down kids, I am also trying to get them to expand their horizons....