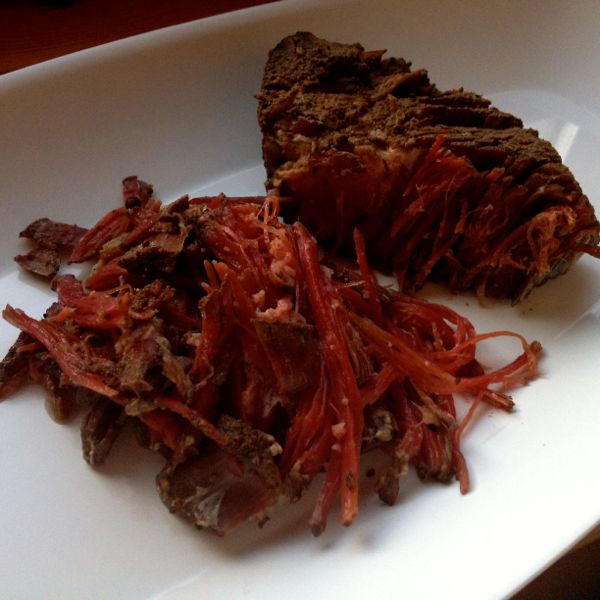 This cured slow cooked beef is a traditional festive dish in my home country of Ireland. It’s an excellent Christmas Eve meal and creates fantastic leftovers in the best breakfast hash you’ll ever eat. Don’t be put off by the long list of ingredients and prep time. There’s not much activity, just time in the fridge before low slow cooking. The flavour is so good, it’s well worth it.

I ordered the brisket at Dombey’s in Market Row but PJ Horwoods in Brixton Village also stock it. You’ll notice the beautiful ruby colour to the meat in the photo. This is because I used saltpetre in my cure which is a nitrate traditonally used to preserve meats such as bacon or pastrami and prevent it losing its attractive colour. You can buy it in some pharmacies or online, but don’t worry if you can’t get it. The salt and sugar will cure the meat perfectly safely, but the colour will be less vivid. The spices all came from the Nour Cash and Carry and the Export Guinness is always available in House of Bottles.

To cure for at least 8 days:

Start by preparing the spices for the cure. Put the whole peppercorns, coriander seeds, allspice, mustard seeds, cloves in a dry frying pan and toast them on a medium heat until the mustard seeds start to pop slightly. Watch the pan closely as they go from lifeless to burnt in the blink of an eye. Take it off the heat immediately and tip them into a pestle and mortar. Add the cinnamon sticks and the bay leaves and crush them all as well as you can without exhausting yourself. Stir in the ground spices and the sugar, salt and saltpetre. Set aside.
Sterilise a large plastic or non metallic container with boiling water and make sure the brisket fits into it. I found it was easier to ask the butcher to cut mine into two pieces rather than try and manoeuvre one big bit here. Rub the sugar salt spice mixture into the brisket well and place it into the container. Seal with a lid and put in the fridge. The salt will draw out liquid from the meat that wet cures it and all you need to do is turn it everyday to coat it well. Leave it to cure for at least 8 days and up to 14.
When you are ready to cook the brisket, begin by boiling the kettle and pouring the water over the shallots in a bowl. Leave them for about 15 minutes and drain. Once cool enough to handle, the skins will peel off without the usual fiddliness. Place them in pan that will hold the beef. Set it on top of the shallots and pour the Guinness and the water over it. You need to just cover the meat, so you may need more or less water. Bob the whole Scotch bonnets in the liquid.

Bring the liquid to the boil, remove any froth from the cooking liquid and then reduce to a simmer. Cook for 2 and a half hours on a heat low enough to simply make the liquid blip and gurgle occasionally. This slow cooking turns the tough brisket into beautifully tender meat. You could use a slow cooker instead. Simply give the meat 7 hours on low.
Lift the meat out of the cooking liquor carefully. It will start to fall apart. Put on a large plate and allow to cool for about 15 minutes. This enhances the flavour and the texture. Cut into slices or pull into strands with two forks. Pour the cooking water away as it will be too salty to use as stock.
Serve the spiced beef with mustard or banana ketchup as you would any cold cut style meat. It’s excellent with some rice and peas or coleslaw on the side and something pickled works nicely. It makes a superb sandwich or a centrepiece on the table. I used some leftovers in pastelles as well. The meat will keep for up to 5 days in the fridge and can be gently reheated.