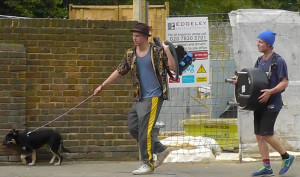 Whirled Cinema an established independent film venue known for showing the best of current art house and independent films opens its doors for an exclusive premier of feature length mockumentary “Brixton Hustle“. Shot by local film maker Louis Lloyd and actor/comedian Henry Smith, the film follows the adventures of various twentysomethings through the London summer showing their time spent hustling in the streets of Brixton.

The film is Lloyds first since his short film “At The Junction” which was accepted for the Young European Film Forum and screened at Peckham Film Festival and his first full collaboration with Smith who can be caught fortnightly at Arch 635‘s open mic sessions. Whirled cinema opens its doors at 7pm with the film starting at 8pm and will be taking open donations on the door from which all proceeds will go to a VSO ICS education programme in Nigeria for which Louis will be volunteering for.

Screening at the Ritzy shines a light on the fashion industry