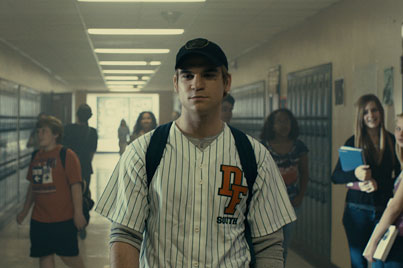 This intense, darkly compelling true crime documentary begins in June 1994 with the disappearance of thirteen-year-old Texan teen Nicholas Barclay. More than three years later, his family are shocked to receive the news that he has been found in a phone box in Spain claiming to have been kidnapped and physically abused. As his family unconditionally welcome him back, certain authority figures begin to question obvious changes in Nicholas’s appearance.

He looks a lot older than he should, his blue eyes are now brown and he finds it impossible to speak English without a French accent. Made up of chilling re-enactments juxtaposed with gripping interviews from Nicholas Barclay’s relatives, a former F.B.I special agent, a U.S consul, a suspicious child psychiatrist and an undeterred private detective, this is the most haunting and provocative documentary you will see this year.

The Imposter opened in London cinemas on Friday 24 with a special screening and Q&A with director Bart Layton at the legendary Ritzy Cinema, Brixton. It was a poignant night for lifetime Brixton resident Layton, whose mum used to drag him to the Ritzy to watch art movies when he really wanted to see Teen Wolf. This statement says everything you need to know about Layton’s directing style.

His film has strong cinematic depth both visually and thematically. He certainly has art house sensibilities when filling a frame, but without neglecting the visceral popcorn thrills of big screen entertainment. Despite being a documentary, The Imposter has the tone and pace of a shadowy cold war thriller.

Layton’s skill lies in being able to pull off this incredibly difficult balance convincingly without trivialising the material. Layton said himself during the Q&A that you can’t shoot TV, upgrade it and then expect it to play well on the big screen.
Again another indication that it’s a documentary specifically made for cinema. But it isn’t just accomplished style that it makes it work so well. There seems to be immense compassion in Bart Layton’s urge to tell a story.

The Imposter is modern objective cinema at its best where there is no perfect truth, and that it doesn’t offer all the answers makes it all the more ambitious. At its heart, it’s an unforgettable, terrifying thriller, where the biggest mystery is human emotions
and the delusions people cling to in order to fill the gaping void that tragedy often leaves behind.

The Imposter is currently on general release at the Ritzy cinema. You can check times and book tickets here. A podcast of the Q&A with Bart Layton is also available here.

Peacemakers at the Ritzy