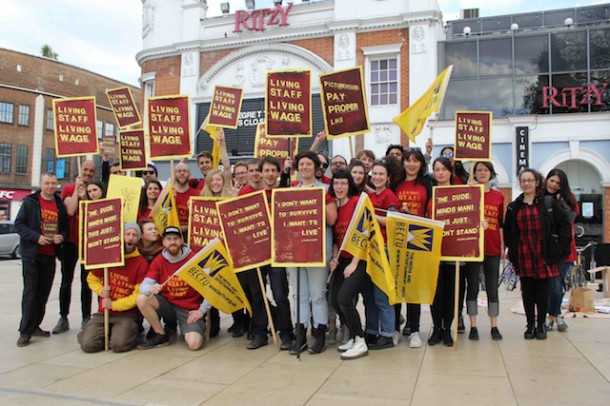 Staff at the Ritzy have voted to reject the pay offer recommended by their union BECTU. Here is the statement released by the Ritzy Living Wage Campaign this morning:

“Yesterday the ballot to determine whether BECTU members at The Ritzy would accept or reject the offer that was achieved by our negotiating team at ACAS last month closed.

BECTU members at The Ritzy have voted by a slim majority to reject the offer.

We would like to make clear that this should not be interpreted as a sign that we are in any sense divided. Nor does it indicate that a large minority of our members viewed this as a good deal that is worth accepting.

Over the last four weeks we have discussed the offer and all the implications of accepting or rejecting it in full at two full BECTU members’ meetings and during lengthy discussion via email and face to face amongst ourselves.

The clear message from these discussions was that our members viewed the offer with considerable disappointment and felt that it fell too far short of the London Living Wage and those who expressed the intention to accept the offer did so purely for practical reasons. Many had doubts even after they had voted to accept the offer that they might have done the wrong thing.

The other clear message that came from the discussions was that we remained united and determined to stick together as a collective and respect the democratic will of the majority, whatever that might be. We stand absolutely by that collective spirit that has already achieved so much during this campaign. Unity is Strength!

The London Living Wage is the absolute minimum a person needs to have a basic, decent standard of living in this city. In being unwilling to accept an unreasonable compromise that would keep them too far below this level for too long our members have acted entirely reasonably.

We now urge Picturehouse management to address the concerns of our members and come back to the negotiating table with an offer that our members might be able to accept. Failing that, our campaign and industrial action will resume imminently.

In the weeks ahead we will need the backing of our incredible supporters, the local community and other trade unionists more than ever before. Updates will follow on Facebook and Twitter.”