There’s more high-profile support for Ritzy staff this week, as they continue to strike in protest against the Picture House Cinema’s refusal to pay the living wage.

It came from Monty Python’s Terry Jones, after the cinema chain controversially decided to open and screen a live streaming of Monty Python’s O2 Arena performance.

Despite last Sunday’s strike, metal barricades were erected to usher cinemagoers in through the friendly protests outside in Windrush Square.

As a consequence, Jones suggested over Twitter that cinemagoers boycott the screening and request a refund from the cinema, in support of the staff. And that appears to be exactly what some customers did.

The decision of Picture House Cinema to go ahead caused telling reactions on Facebook – some questioning the message the cinema chain were giving out to residents by erecting barriers, and others vowing not to renew membership until staff were fairly paid.

Jones is the latest high-profile voice to support Ritzy staff, joining Eric Cantona, Ken Loach and Russell Brand, who have all signed the petition – found here.

Lyn Goleby, Picturehouses managing director, told the Independent: “We are one of the highest-paying cinema operators in London.  Only about 250-odd companies signed up for the London Living Wage, and you won’t find many cinemas and retailers among them. It’s not viable for these kinds of businesses.” According to Goleby, only four people cancelled their tickets for the screening, and, she added, “only one specifically said it was in support of the strike”.

In other protest action, last Thursday Ritzy staff also joined a march from the BFI to City Hall (via Leicester Square and the offices of Picture House Cinema). At City Hall, Ken Loach delivered a speech praising the determination of Ritzy staff. 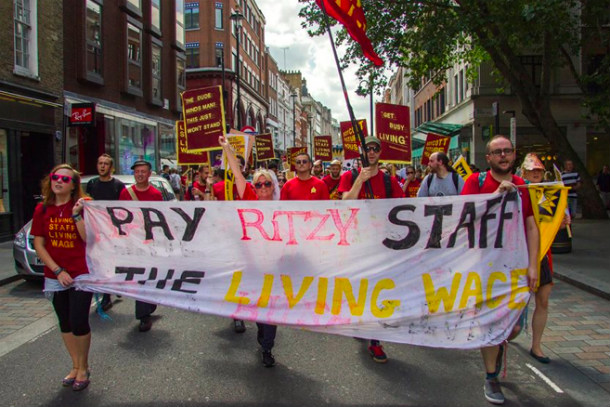 WHAT’S ON: The weekend ahead in Brixton