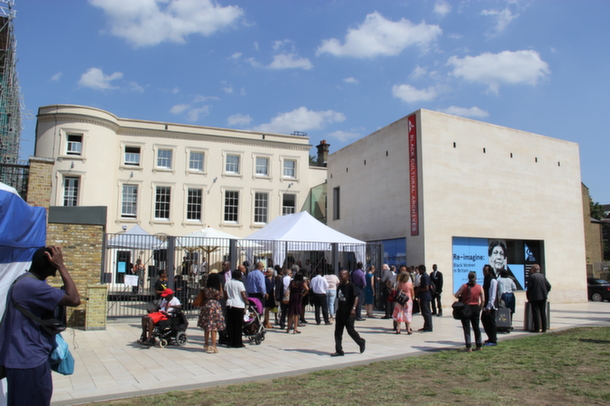 Black celebrities and dignitaries joined hundreds of others from the community for the moving launch of the Black Cultural Archives centre, in Windrush Square today.

SCROLL DOWN FOR A FULL PICTURE GALLERY

The sun shone down on the new £7million headquarters, as guests came together to celebrate thousands of years of black history in Britain.

Among the famous faces at the launch were the footballer Sol Campbell, author Zadie Smith, Baroness Floella Benjamin and poet Benjamin Zephaniah.

A public musical celebration, in Windrush Square, was due to begin at 6pm.

Chairperson of the Black Cultural Archives, Dawn Hill told the guests in the new courtyard: “It has taken a prolific and talented combination of people with unflinching determination and belief in the aspiration and vision of Len Garrison – co-founder of the BCA – to build a 21st century archive to collect, preserve and celebrate the history of Black communities in Brixton.”

The archives were co-founded by historian Len Garrison in 1981, and he was celebrated at the launch today.

Director Paul Reid told the audience that the first statue unveiled in the new centre was of Mr Garrison. Reid also thanked the Heritage Lottery fund, which provided some £4million for the project, and Lambeth Council who have provided funding and handing the BCA a 99-year lease for the Raleigh Hall.

Poet Benjamin Zephenaiah – who was visiting the new BCA headquarters for the first time – told the Blog: “One of the most important things for me is this is something really good for the community.

“I remember when it was just an idea. Len Garrison sat down in 1979 and said he had an idea. He started out with one folder and it has grown form there. Management has come and gone but there has always been perseverance.”

Zepheniah said he hoped the Brixton HQ would be the first of many outposts of the Black Cultural Archives around the country. But he added: “For this location in London, you couldn;t have written the script. This is the heart of one part of the black community – from my mother’s generation.”

Floella Benjamin, former television presenter made a life peer in 2010, said: “It is great to see that the past is being recognised to include in all British history. Parts of black history have been excluded for far too long.

“This will let all children see that they can be anything they want if they put their minds to it.”

Lee Jasper, community activist, said: “This is a brilliant day, I am feeling exceptionally proud, and I am delighted this has happened. They have had real set back, but we can celebrate today because of a relentless drive and commitment to make it happen.”

The public celebration in Windrush Square has already begun.