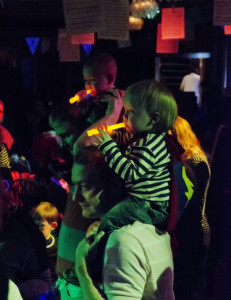 You are never too young for a rave, Tom O’Neill finds out as he chats to the founder of ‘Big Fish Little Fish’.

Hannah Saunders seems like exactly the kind of person who would run a rave: An idealistic, kind-hearted hippy with an impressive clubbing CV. She was there at Shoom, Megatripolis and Whirl-y-gig, and we also shared some common ground on having witnessed the last nights of London’s bastion of noughties-clubbing – The End. Then I find out that before her ‘baby-rave’ venture kicked off, Hannah was the Deputy Director of Policing for the Home Office. Eh?

Some things in life just go together in a way that you would not expect. It is almost… an analogy… for ‘Big Fish Little Fish’ – which is a rave for children. Another two things that don’t go together normally. See. Wow.

‘Big Fish Little Fish’ is Hannah’s ‘family friendly’ night in the most literal sense. This idiom is most often associated with a chuckly old geezer running a mobile disco playing ‘Agadou’ – but this sounds way more fun than that.

“We didn’t want to do something which was family friendly in the sense that it was actually fun for the children and rubbish for the grown-ups. We wanted something that gave mutual enjoyment for everyone there. It’s a musical, colorful and genuinely social environment where we play proper dance music which everyone enjoys,” explains Hannah.

“But, what about the poor little tykes’ ears?” I ask, not using those words. 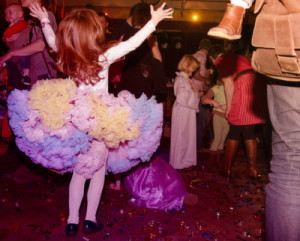 “We turn it up pretty loud actually. That surprises a lot of people when they come, but the audio levels are very safe for the kids whilst being a bit like a real dance floor. And the adults can also have a couple of drinks. Everyone has fun.”

Hannah goes on to tell me about the kids dancing on stage, the glitter cannons, the glow sticks, the parachute dance made famous by Whirlygig and I start to feel a slight twinge of jealousy. It sounds like a really good club. In fact, I feel slightly annoyed that I don’t have some children to drag along and dance to Nihal with whilst going mental on orange squash. BFLF has also seen Si Begg, Robin from Hexstatic and Hatcha play. These are big sounds for little people.

But, like all good raves, what really makes it shine is the ephemera that swirl all around it. There are giant murals, arts and craft areas, fancy dress themes and even Korg have been coming down to do workshops and product development. They have also had installation artists Hellicar and Lewis pay a visit and Goldsmiths University have dropped by to create animated screens which kids (and grown-ups) can activate through their shape throwing. 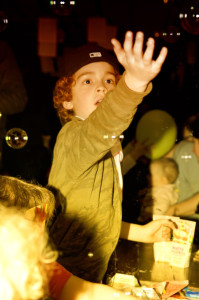 Most importantly though, BFLF has soul. Hannah tells me about a mother whose young autistic boy held her hand on the walk home from a BFLF party for the first time. Then in a moment of lucidity right at the end of our chat, gives me this little beauty: “It’s about being in a non-judgmental environmental where we can offer each other our help and support. It’s about unity.” The rave spirit.

Bring your children to this night and dance to loud music. If I had some I would.

Where: Mostly at The Bedford in Balham or Jamm in Brixton, but keep an eye out here for where things are going on.

Who: It’s from babies up to about eight year-olds, but the most common age range is 2-6.

When: Get over here and book your tickets for September 14th at The Bedford with DJ Food who describes BFLF as ‘the maddest party he’s ever played.’