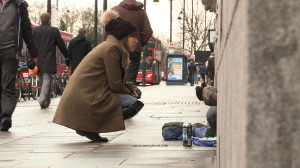 Moving to Brixton at the beginning of this year reignited my interest in a topic I have wanted to make a film about since a life-changing experience completely transformed the way I feel about the issue of begging and homelessness.

When I left school I volunteered in a hostel for homeless young people. Before then the only conversation I had ever had with a beggar was to refuse requests for money. But working in the home I met countless teenagers with life stories that rival most horror films, and soon came to the conclusion that in the future, if and when I’m asked to help I always will – even if that means giving money to fund a drug or alcohol habit.

My studies and subsequent career in journalism led me to set up home in the Midlands for several years; in a city where I wasn’t often required to put my moral stance into practice. Yet within a short time of relocating to Brixton, my always-give mantra meant a penniless purse and a nagging feeling that the spare change I had given to the painfully thin, wide-eyed woman pleading for help to feed her ‘hungry children’ every day that week, clearly wasn’t helping.

An experience one evening at Brixton station reaffirmed my believe that this is an issue deserving of further exploration. While queueing at a hole in the wall, the same women I had given change to on my way to work that morning, latched on to my Brixton-born friend begging for help to feed her hungry children. When he offered to accompany her to a nearby restaurant she refused, asking for money instead. So he gave her an ultimatum; if she needed food to feed her children he would take her to a shop and pay, but under no circumstance would he give her money. Before he had finished the sentence, she was gone.

When I hear about ‘fake’ beggars spending the day on the streets to dupe compassionate Londoners into handing over their hard-earned cash, I’m sceptical. I can’t help thinking about the now-infamous spikes used to deter homeless people from loitering outside the homes of well-to-do Londoners. Surely we should be helping those less fortunate, not questioning their integrity? In making Beggar Off I wanted to investigate whether there’s any truth in the reports of fake beggars, and what I found painted a far more complicated picture than I could have ever imagined. When kind-hearted Londoners give their spare change to beggars, they could be doing more harm than good – in some cases, funding serious organised crime. And yet over the course of filming I met people desperately trying to turn their lives around – like Brigitte, a mother on deaths door after decades of begging to fund her alcohol addiction. Ultimately I wanted to make this film to try and find out who genuinely deserves my money. I hope that by watching my documentary, you will feel better informed to deal with this issue compassionately.

Beggar Off will air tonight at 8pm on London Live