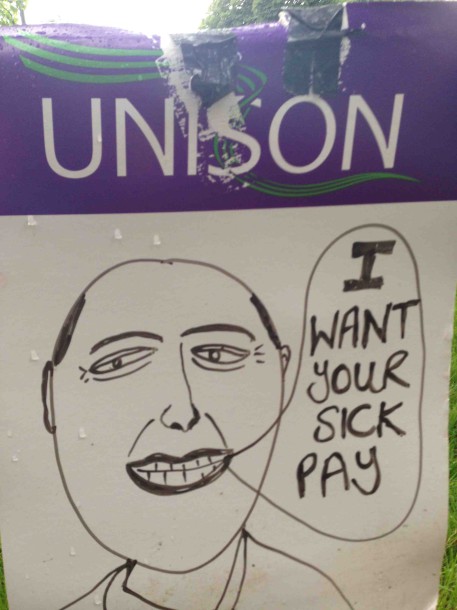 Picket lines in Brixton and Clapham remained strong this week as staff at Lambeth College continue to strike, while Unison has announced that its staff members will be striking this Wednesday and Thursday too.

College staff are protesting against a contract brought in by the college from April for new staff only, which will mean they work longer hours, will work during the traditional college holidays, and will have less sick pay.

Members of the University and College Union (UCU) walked out indefinitely last Tuesday June 3. Students have received text messages telling them to stay away from College as their classes have been cancelled.

The UCU also hit out at Lambeth College yesterday, claiming the institution has a much higher than average staff turnover. It points to a report mentioned in recent board meeting minutes which shows the staff turnover is 24%, compared to the national average of 18%.  A UCU spokesperson said: “Slashing people’s benefits and increasing their working hours will not fix this problem.

“Staff have been on strike for a week already now. The time has come for the college to come back to the negotiating table to get this dispute resolved.”

The College has used agency staff to try to cope with the disruption. A spokesperson for the College said: “The impact of the new contract on Unison members is minimal. All sites will remain open and the College will continue to ensure minimal disruption occurs to its learners. All exams and assessments will take place as planned. “

“We do not have a problem with turnover, the increase in the last few years has been as a direct result of managing the largest deficit in London and addressing some historical quality issues. We also have 22% of the workforce that are aged 55 or over which will naturally result in more people choosing to leave at a time when they may have ordinarily retired.”

For more information on the strike see here.