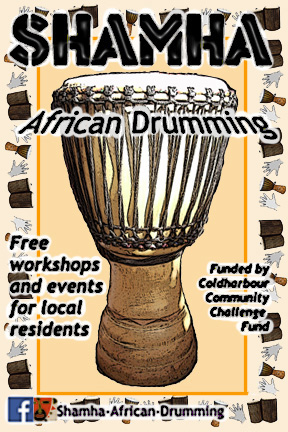 Djina says the free workshops will “offer local residents the opportunity to come together and enjoy being shown how to play some West and North African drum rhythms and to join in a drum circle, which can help to calm the mind.”

Djina has already held several free workshops over the spring and the next one will be on June 14 between 6-10pm at the C.A.F.E. on Coldharbour Lane. Djina will be performing alongside storyteller Carlos Ouedraogo, Master Drummer Henri Gaobi and other musicians. Workshops will also take place on June 22 and 29, from 5-7pm.